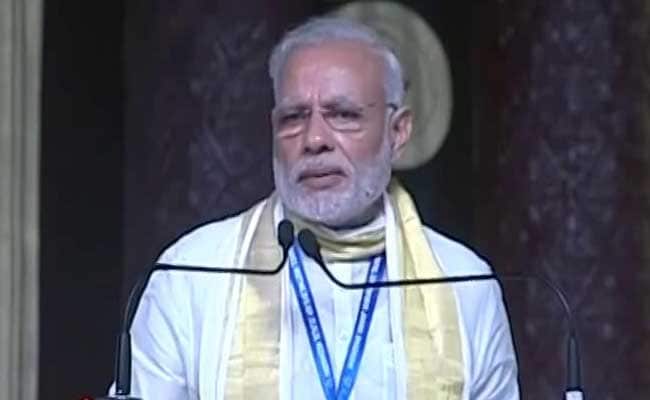 Prime Minister Narendra Modi also emphasised on the concepts of reuse and recycle.

New Delhi: Reiterating the importance of recycling and reusing waste to create wealth, Prime Minister Narendra Modi on Friday called for "Swachhagraha" or insistence on cleanliness, like Mahatma Gandhi's "Satyagraha".

Addressing the India Sanitation Conference inaugurated by Mr Modi at Vigyan Bhavan in New Delhi, Union Minister for Rural Development, Drinking Water and Sanitation and Panchayati Raj Narendra Singh Tomar said that by October 2 this year, one lakh villages will become Open Defecation Free or ODF while 40 districts across the country will achieve ODF status in the current financial year.

"Only budget allocations cannot further cleanliness. Like... 'Satyagraha' that freed us from the British, today there is need for 'Swachhagraha' to make India free from filth," said PM Modi, calling upon "Swachhagrahis" to launch crusade against filth and refuse.

"The cleanliness movement has spread its root in a very short time. But to make it effective, people should develop a strong sense of cleanliness and an equal dislike for dirt," he said.

Emphasising on the concepts of reuse and recycle, the Prime Minister said that people needed to create wealth from waste.

"We need to recreate wealth from waste. We can bring a very big change by effectively reusing things and recycling waste. The concept of reuse and recycle has traditionally been part of our habit. We need to make these more technology driven," he said.

Mr Modi also said the government has taken an important decision to buy electricity generated from waste material to promote the initiative.

Promoted
Listen to the latest songs, only on JioSaavn.com
At present 87,666 villages are ODF, apart from 1,544 villages in Namami Gange areas. So far 24 districts have been declared as ODF.

Sikkim is the only state which has achieved the ODF status, and Kerala, Haryana, Gujrat and Maharashtra will soon achieve the ODF status.
Comments
Narendra ModiOpen Defacation FreeMahatma GandhiNarendra Singh Tomar