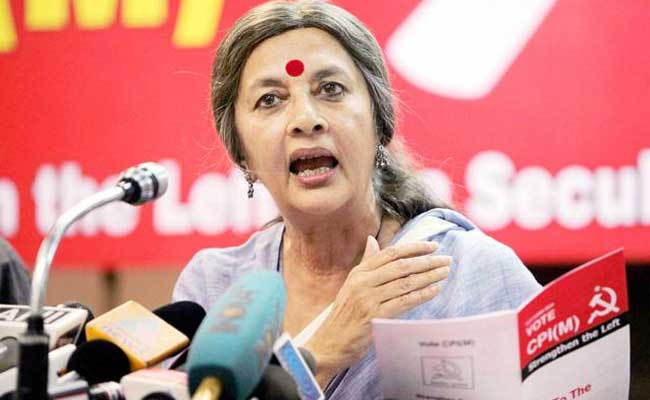 Brinda Karat alleged that BJP is trying to divide people on communal lines and doing politics of "nationalism" by curbing freedom of expression in universities. (File photo)

"Modiji, you said in a rally in Assam that you sold Assam tea and are so indebted to the state. But answer the people what you have done for tea garden workers. You and your policies have bulldozed them," Ms Karat said at an election rally in Guwahati.

The central government has stopped the ration for tea garden workers after the BJP-led NDA came to power, she said.

"You have not given the ST status to six tribes, among which one is tea tribe. And you talk about being a chaiwala! You are far away from the problems of tea garden workers," Ms Karat said.

The senior CPI(M) leader charged Modi with violating the Model Code of Conduct by announcing to offer various packages to different areas.

Ms Karat, however, exuded confidence that people of Assam would reject such politics of package as was done by people during Delhi and Bihar polls.

She alleged that BJP is trying to divide people on communal lines and doing politics of "nationalism" by curbing freedom of expression in universities.

Ms Karat also criticised the "corrupt" Congress government for failing to work for all-round development of the state.

She said both BJP and Congress were responsible for rising prices of essential commodities.

"Only two per cent families in Assam got 100 days of work and it is just three per cent in Gujarat. However, the figure for Tripura is 52 per cent.

Ms Karat alleged that the 15-year rule of Congress had witnessed numerous clashes among different communities in Assam.

The senior CPI(M) leader was in Guwahati to campaign for Sangita Das, the party's candidate in Dispur constituency.