This is PM Modi's second visit to China in little over five weeks. 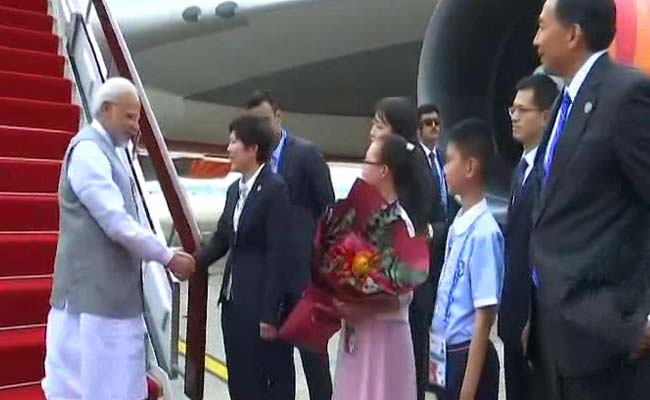 PM Modi is on a two-day visit to China primarily to attend the SCO summit.

Qindao: Prime Minister Narendra Modi arrived in Qindao today on a two-day visit primarily to attend the annual summit of Shanghai Cooperation Organisation or SCO which is likely to deliberate on several pressing global issues including future of Iran nuclear deal, the impact of US sanctions on Russia and situation in the Indo-Pacific region.

It is PM Modi's second visit to China in little over five weeks. He was in the Chinese city of Wuhan on April 27 and 28 to attend an informal summit with President Xi Jinping.

Diplomats said the summit is also likely to explore ways to deepen cooperation among the SCO member countries in dealing with threats of terrorism, extremism, and radicalisation besides delving into issues relating to trade, investment, and connectivity.

It is for the first time the Indian prime minister will be attending the SCO summit after India along with Pakistan became a full-fledged members of the grouping, jointly dominated by China and Russia, which has been increasingly seen as a counter to NATO.

In his address at the SCO, PM Modi, is likely to articulate India's position on dealing with major challenges facing the world including ways to tackle terrorism, and boosting trade and investment in the region.

The summit in this Chinese port city is taking place under the shadow of Washington's pull out from the Iran nuclear deal, its sanction regime against Russia and frictions with China over the trade tariff dispute and diplomats said all these issues may figure at the summit as well as during deliberations on its sidelines.

In the wake of Washington's strained ties with Russia, China and Iran, officials said the SCO summit will provide an opportunity for President Xi and his Russian counterpart Putin to reflect on a common vision for the region and present the bloc as a powerful voice to deal with pressing global issues.

The situation in the Indo-Pacific may figure in the talks but it is unlikely that the issue will find a mention in the SCO outcome document.

Officials said the US pull out from the Iran nuclear deal, Washington's sanctions against Russia under the Countering America's Adversaries Through Sanctions Act (CAATSA) may also figure in the talks. The sanctions have impacted Russia's defence cooperation with a number of countries including India.

The SCO leaders are also expected to review the situation in the Korean peninsula, Afghanistan and Syria.

Officials said India will pitch for evolving effective ways to deal with the growing challenge of terrorism and enhancing security cooperation among SCO countries.

India is also keen on deepening its security-related cooperation with the SCO and its Regional Anti-Terrorism Structure (RATS) which specifically deals with issues relating to security and defence.

India was an observer at the SCO since 2005 and has generally participated in the ministerial-level meetings of the grouping which focus mainly on security and economic cooperation in the Eurasian region.

The officials said India is also likely to focus on importance of regional connectivity projects to boost trade among members of the SCO countries. India has been strongly pushing for connectivity projects like the Chabahar port project and International North-South Transport Corridor to gain access to resource-rich central Asian countries.

PM Modi is expected to hold nearly half a dozen bilateral meetings with leaders of other SCO countries. However, there is no official word on whether there will be any interaction between PM Modi and Pakistan President Hussain, who is scheduled to attend the meeting in China.

Promoted
Listen to the latest songs, only on JioSaavn.com
The SCO was founded at a summit in Shanghai in 2001 by the presidents of Russia, China, Kyrgyz Republic, Kazakhstan, Tajikistan and Uzbekistan. India and Pakistan became its members last year.