PM Modi will address the SCO Summit tomorrow and is expected to meet Chinese President Xi Jinping amid growing differences between the two countries over the China-Pakistan Economic Corridor and India's Nuclear Suppliers Group membership bid. 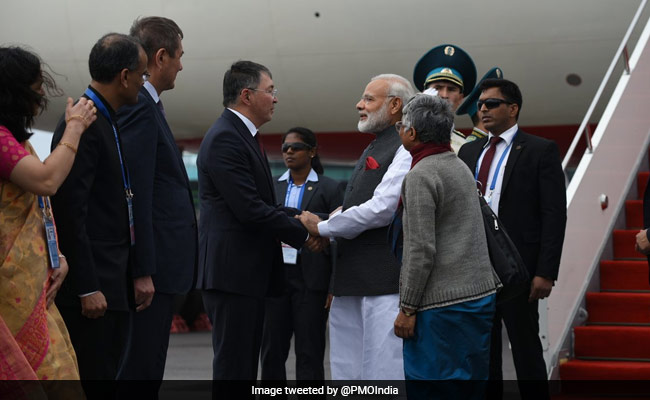 Astana: Prime Minister Narendra Modi arrived in the Kazakhstan capital today on a two-day visit to attend the Shanghai Cooperation Organisation (SCO) Summit where India and Pakistan will be inducted as full members of the bloc, in the first ever expansion since its inception in 2001.

India's entry into the China-dominated grouping is seen as a major milestone as it is expected to increase the group's heft in regional geo-politics and trade negotiations besides giving it a pan-Asian hue.

Experts say India's inclusion may even bring down Beijing's overarching influence over the SCO.

The Prime Minister will address the SCO Summit tomorrow and is expected to meet Chinese President Xi Jinping amid growing differences between the two countries over a host of issues, including the China-Pakistan Economic Corridor and India's Nuclear Suppliers Group membership bid.

If the meeting takes place, then it would be the first between the two leaders after India boycotted the high-profile Belt and Road Forum held in Beijing last month in which 29 world leaders took part.

India abstained from the Summit to highlight its concerns over the USD 50 billion China-Pakistan Economic Corridor which is part of the Belt and Road Initiative (BRI) and passes through Pakistan-occupied Kashmir (PoK).

There is also speculation about a possible meeting between PM Modi and Pakistan Prime Minister Nawaz Sharif to ease the growing tension between the two neighbours.

However, India has been maintaining that there was neither any request from Pakistan's side nor any such proposal from the Indian side for a Modi-Sharif meeting.

The Prime Minister is also expected to meet a number of other foreign leaders, including Kazakhstan President Nursultan Nazarbayev.

"I look forward to deepening India's association with the SCO which will help us in economic, connectivity and counterterrorism cooperation, among other things," Prime Minister Modi said ahead of his visit in Astana.

The SCO had set the ball rolling to make India a member of the bloc during its summit in Ufa, Russia, in July, 2015, when administrative hurdles were cleared to grant membership to India and Pakistan.

SCO Secretary-General Rashid Alimov said entry of India and Pakistan will enhance the SCO's influence in dealing with pressing challenges and promoting trade and investment in the region.

Inclusion of India and Pakistan into the SCO would mean addition of another 1.45 billion people which would make the grouping cover around 40 per cent of the global population.

The SCO was founded at a Summit in Shanghai in 2001 by the Presidents of Russia, China, Kyrgyz Republic, Kazakhstan, Tajikistan and Uzbekistan.

India, Iran and Pakistan were admitted as observers at the 2005 Astana Summit. The Tashkent SCO Summit in June 2010 had lifted the moratorium on new membership, paving the way for the expansion of the grouping.

India feels as an SCO member, it will be able to play a major role in addressing the threat of terrorism in the region.

India is also keen on deepening its security-related cooperation with the SCO and its Regional Anti-Terrorism Structure (RATS) which specifically deals with issues relating to security and defence.

India has been an observer at the SCO since 2005 and has generally participated in the ministerial-level meetings of the grouping which focus mainly on security and economic cooperation in the Eurasian region.