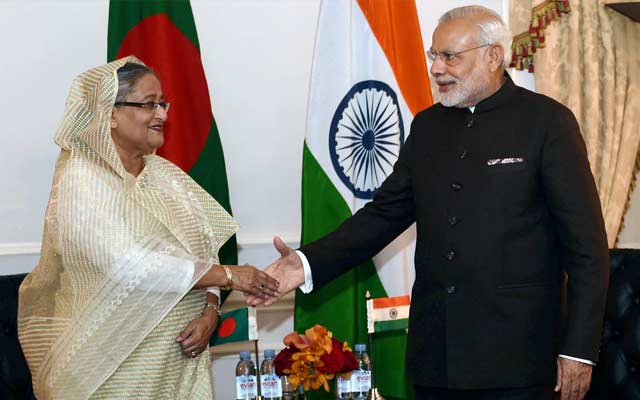 The two leaders reviewed the progress in bilateral relations since the time they had last met when PM Modi had visited Bangladesh in June.

New York: Expressing satisfaction over the smooth implementation of the Land Boundary Agreement between India and Bangladesh, Prime Minister Narendra Modi had a very good meeting with his Bangladesh counterpart Sheikh Hasina in New York today.

"Both of them expressed great happiness at the very smooth manner in which the land boundary agreement had been implemented. They look forward to the continued implementation of the agreement in the coming months," said Vikas Swarup, spokesperson for the ministry of external affairs.

The two leaders reviewed the progress in bilateral relations since the time they had last met when PM Modi had visited Bangladesh in June.

Ms Hasina reiterated Bangladesh's support for India's bid for a permanent seat in a reformed UN Security Council (UNSC). She said that "there must be reform of the UNSC and the 70th anniversary of the UN affords an excellent opportunity to the international community" to speed up efforts and complete the reforms process.

Both leaders also discussed the need to reform other global institutions like the International Monetary Fund and the World Bank. They also discussed issues of connectivity and infrastructure, as well as the sustainable development goals (SDG).