Fix Goals For Next 25 Years: PM Modi To BJP Leaders 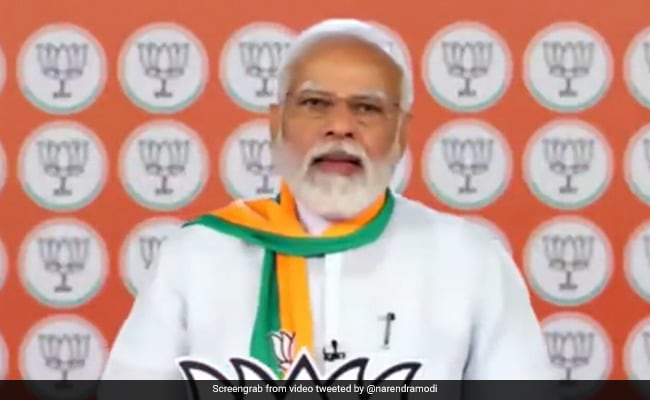 Asserting that eight years of his government have been dedicated to good governance and social justice, Prime Minister Narendra Modi on Friday asked BJP leaders to stick to the issues of national interests and not to "fall in the trap" of some political parties with an "ecosystem" to divert the country's attention from main matters.

In his virtual address to a meeting of BJP office-bearers in Jaipur, PM Modi also asked them to avoid any shortcut and move forward on the core issues of the country's interests. It is the time for BJP to fix its goals for the next 25 years and work continuously for them, he asserted.

The Prime Minister's address came days before his government completes its eighth anniversary and at a time when the reported finding of a "Shivling" in Gyanvapi mosque during a court-ordered survey has escalated into a major row.

While the BJP has brought development into the mainstream of national politics, some political parties have been playing with the country's future for their momentary benefits, he claimed, hitting out at rivals without naming them.

For their selfish interests, the parties look for small tensions and weaknesses in the society to pour poison into them, PM Modi alleged, adding they incite people sometimes in the name of caste or regionalism.

It is essential for the BJP, which is moving forward with its dream of 'Ek Bharat, Shrestha Bharat', to keep cautioning people against these forces and parties, he said.

Noting that since the days of Jana Sangh, the forerunner to the BJP, patriotism, national interest and nation-building were at the center of its policies and programs, he said this patriotism has inspired the party to focus on development and trust.

"Friends, we don't ever have to take any shortcut. We have to move forward on the core issues associated with the country's interests. Our steps should not go astray and we don't have to let our tongues slip.

"What are these core issues? Poor's welfare, making the poor's life easier. We have to keep working to empower the poor. We never have to lose our way," the prime minister said.

He told the BJP members that countless attempts will be made to detract their focus from the country's main issues and urged them to stick to the matters of development.

"We have been seeing how the ecosystem of some parties is trying with their full strength to distract the country's attention from its main issues. We never have to fall in the trap of these parties," PM Modi added. Noting that the 75th year of Independence, is being observed by the government as "Azadi ka Amrit Utsav", he said the country is setting itself the goals for the next 25 years and added that this is also the time for the BJP to fix its goals for the next 25 years and work continuously for them.

The Prime Minister said people's faith in the government's delivery mechanism has been restored post-2014.

PM Modi said the eight years have been of the fulfillment of the expectations of small farmers, labourers and the middle class.

The BJP government post-2014 has restored the faith of the people in the government, its systems and its delivery mechanism, that had been lost earlier, the prime minister added.

PM Modi said the world is looking at India with great expectations. "Similarly, in India, the people have a special affection for the BJP. The people of the country are looking at the BJP with great faith and hope." After 2014, the BJP brought people out of despair and now people are full of aspirations, the prime minister said.

"This hope and aspirations of the people of the country increase our responsibility," he told the BJP office-bearers.

He kept up his attack on dynastic parties and said the BJP has to keep fighting them to save democracy and empower it. These parties exist to further family interests and have inflicted a lot of damage on the country, he said.

PM Modi asked the BJP leaders to launch a campaign to ensure that no poor or eligible beneficiary is left out of the government's welfare measures. He also asked them to ensure the participation of more people, especially the youth eager to write "code" for the country's prosperous future, with the party.