PM Modi Afraid Of Congress As It Speaks The Truth: Rahul Gandhi

Asked about PM Modi's attack on India's first prime minister, Mr Gandhi said it does not matter whether he attacks the Congress or Nehru. 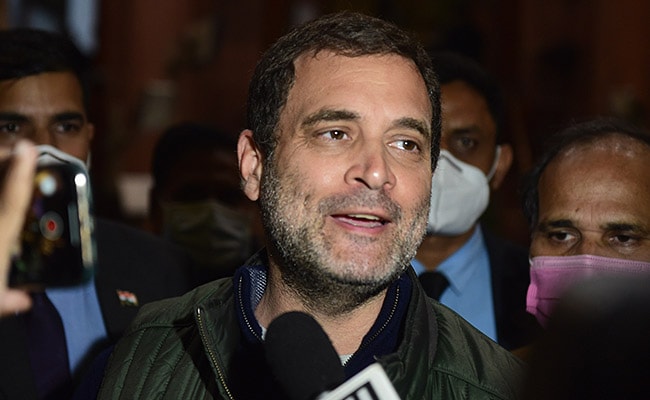 PM is little afraid of the Congress. There is little anxiety as Congress speaks the truth: Rahul Gandhi

Rahul Gandhi on Tuesday claimed that Prime Minister Narendra Modi was afraid of the Congress as it spoke the truth which is why he attacked the party in both Houses of Parliament.

He also said if the prime minister likes abusing the Congress and his great-grandfather Jawaharlal Nehru, "be my guest, but do your job".

"I do not need anyone's certificate for my great-grandfather. I don't care what anybody says about him," the former Congress chief said.

Replying to the motion of thanks on president's address, PM Modi on Tuesday continued his no-holds-barred attack on the Congress declaring even Mahatma Gandhi wanted it dismantled and claiming there would have been no Emergency, no massacre of Sikhs, no caste politics and no exodus of Pandits from Kashmir had the Congress not been there.

The Congress staged a walkout from the House during the prime minister's address, prompting Modi to say that one needs to listen too in a democracy and that the party was used to only preaching to others till now.

Mr Gandhi said the prime minister did not answer the issues of "two Indias", China and Pakistan "getting together" and the attack on India's institutions, raised by him in the Lok Sabha.

"He is a little afraid of the Congress. There is a little anxiety because the Congress speaks the truth. He is in the business of marketing. He has spread lies. So fear is natural and that showed in Parliament.

"The whole speech was about Congress, what Congress did not do and Nehru did not do. But nothing on BJP's promises. There is fear," he said when asked about the prime minister's attack on the Congress.

Asked about PM Modi's attack on India's first prime minister, Mr Gandhi said it does not matter whether he attacks the Congress or Nehru.

"It is important that people understand what he is doing," the former Congress chief said.

"My great-grandfather served this country and gave his entire life to it. He did what he had to do as did other members of my family and millions of people of this country." Gandhi said in his speech in the Lok Sabha, he raised the issue of "two Indias", one of the poor and the other of the rich, and that all institutions are being "captured" which is harming the country.

He said that he also talked about China and Pakistan "becoming one" that presents a major danger to India.

"The prime minister did not answer any of the three issues I raised," Mr Gandhi said.

The Congress leader pointed out that he had earlier warned that Covid was a danger "but the prime minister did not agree".

"Now I said there is a danger from China and Pakistan and this is a serious issue. This is no joke. The other two issues must also be taken seriously. These are not jokes. The country is being weakened. The prime minister said nothing on these things."

About the statement of the external affairs minister's comments that China and Pakistan were together earlier too, Mr Gandhi said, "The gentleman obviously does not understand his job very well."

Following Rahul Gandhi alleging in Lok Sabha that the Narendra Modi government brought Pakistan and China together, External Affairs Minister S Jaishankar said, "Perhaps, some history lessons are in order: In 1963, Pakistan illegally handed over the Shaksgam valley to China; China built the Karakoram highway through PoK in the 1970s." The external affairs minister said the two countries also had close nuclear collaboration from the 1970s. "In 2013, the China-Pakistan Economic Corridor started. So, ask yourself: were China and Pakistan distant then?" he said.

Rahul Gandhi on Tuesday replied, "He has to understand that there is something new that is taking place. That Chinese and Pakistanis are now one and India is facing a cyber superpower. So, India needs to be very careful," Cited the USD 90 billion Belt and Road initiative, Chinese troops in PoK, he claimed that Pakistan military people are sitting in China looking into Pakistan and China's military strategy.

He advised the government to "wake up on this serious issue".

"You are in sleep right now, ignoring the facts. The Chinese have entered Ladakh, positioned themselves in Doklam. You are asleep, please wake up. It is very dangerous for the country. If you like abusing the Congress and Nehru, be my guest but do your job," Mr Gandhi said.