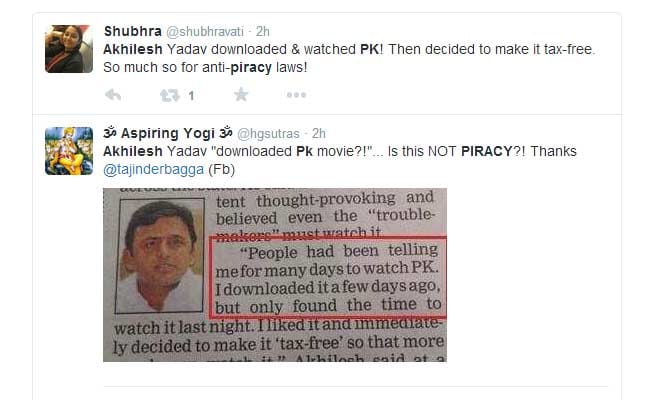 Lucknow: Uttar Pradesh Chief Minister Akhilesh Yadav is facing scorn on social media after letting it slip that he downloaded the film "PK" and watched it.

Mr Yadav made the comment at a press conference on December 31, when he declared the film tax-free in his state saying he was impressed by it.

"People had been telling me for many days to watch PK. I downloaded it a few days ago, but only found the time to watch it last night. I liked it immediately and decided to make it tax-free so that more people can watch it," he said about the Aamir Khan starrer released on December 19.

It was meant to be a message to fringe groups who have protested in parts of Uttar Pradesh against PK, claiming that the movie insults Hindu gods and god-men.

But the country's youngest Chief Minister was soon being accused of piracy on Twitter.

"So much for anti-piracy laws!" said one tweet, along with a screenshot of the quote.

The Chief Minister's Office attempted damage control with its own tweet this morning.

Officials say the Chief Minister has a legitimate paid download facility, but it is not clear whether it is allowed for films that are still running in theatres.