Not Just This Decade, It Is India's Century: Piyush Goyal

Piyush Goyal said that in the last few years India has created the foundation to rapidly transform and grow its economy. 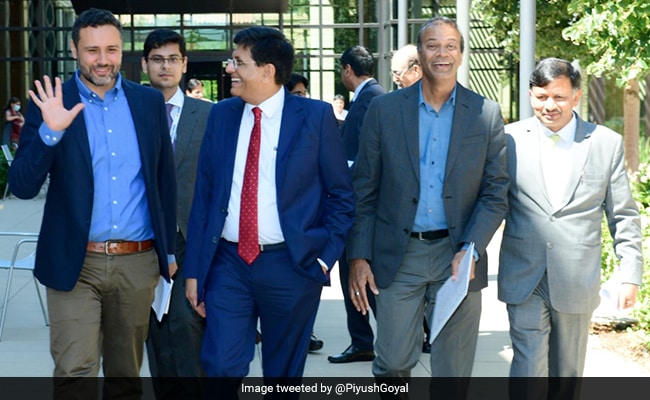 Piyush Goyal invited the Stanford students to engage with India.

It is not just this decade but the entire 21st century belongs to India, said Union Minister for Commerce and Industry Piyush Goyal while interacting with the faculty and the students of the Stanford Graduate School of Business in San Francisco on Tuesday.

Mr Goyal invited the Stanford students to engage with India and work with a billion-plus people with great aspirations.

The minister is on a six-day visit to the US for various programmes, including the India-US Strategic Partnership Forum conference and the Indo-Pacific Economic Framework (IPEF) ministerial meeting.

During his interaction with the students, Mr Goyal said that in the last few years India has created the foundation to rapidly transform and grow its economy, improve its systems, engage with technology and learn from the best in the world.

The minister also stressed that India has been striving to ensure that every citizen of the country and every child born in the nation has a right to a good quality of life and a bright future.

Referring to India's exports which have already crossed $675 billion in the last financial year, he said that the nation was now aspiring to take its international trade to $2 trillion by 2030. He said by the time India celebrates the 100th anniversary of its Independence it would be a $30 trillion economies.

"That is the kind of opportunity India presents to the world. This is not just India's decade, it is India's century," he added.

Further, referring to entrepreneurs and startup champions, Mr Goyal said India's new education policy is giving a fillip to liberal education and looking at deeper collaborations with the best schools across the world.

He added India had successfully used several management principles such as root cause analysis, innovative financing models, and economies of scale among others to ensure the success of the LED lighting program. It may be noted that India has been able to save around 80 million tonnes of CO2 emissions because of that program.

Mr Goyal added that India, which was once a net importer of LED lamps, now has several manufacturers of high-quality LED lamps exported worldwide.

Later, speaking of India's success in fintech services, the minister said that nearly 40 per cent of all digital transactions across the world are happening out of India today, with even small vendors accepting digital payments.