Pilgrims From Uttarakhand Can Visit Kedarnath From May 4: Chief Minister

Coronavirus Uttarakhand: All the three districts in Garhwal region where the four Himalayan shrines also known as the 'Uttarakhand Chardham' are located fall in the green zone with not a single COVID-19 positive case reported from there as yet. 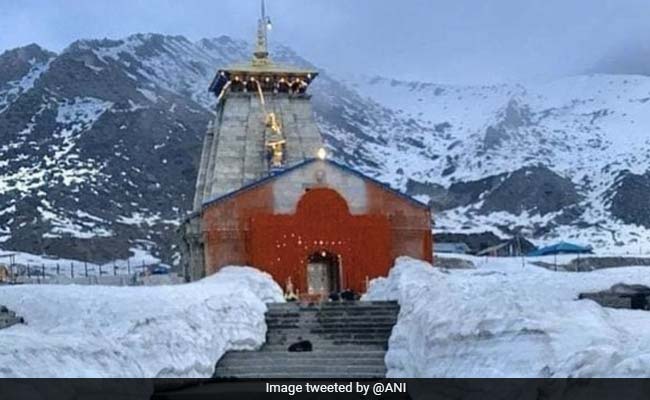 Kedarnath temple was opened on April 29. Only pilgrims from Uttarakhand allowed for the time being

Pilgrims from Uttarakhand can visit Kedarnath and other Himalayan temples in the state from May 4, Chief Minister Trivendra Singh Rawat said on Saturday.

As inter-district movement of people is being allowed with certain restrictions from May 4 especially in districts which fall in the green zone, pilgrims from the state can visit Kedarnath, Mr Rawat said.

However, the Chief Minister appealed to the people to maintain physical and social distancing while paying obeisance at the temples as their safety is of utmost importance.

The portals of Kedarnath were opened on April 29 in the absence of pilgrims due to the extended lockdown.

Asked when devotees from outside Uttarakhand will be allowed to visit the shrines in the hill state, Mr Rawat said the COVID-19 situation is a roadblock and his government was waiting for things to normalise.

"After the Kedarnath tragedy in 2013, a similar mood of despair gripped people but we overcame it and the yatra was put back on track. I am confident coronavirus will be defeated in the end and the usual glow will return to the temples," Mr Rawat said.

All the three districts in Garhwal region where the four Himalayan shrines also known as the 'Uttarakhand Chardham' are located fall in the green zone with not a single COVID-19 positive case reported from there as yet.

While Gangotri and Yamunotri temples are located in Uttarkashi district, Kedarnath is situated in Rudraprayag district and Badrinath in Chamoli district.

All these temples are open except Badrinath which has been rescheduled to open on May 15 due to the lockdown.

Gangotri and Yamunotri temples were opened on the occasion of Akshay Tritiya on April 26.