Lieutenant General Kanwal Jeet Singh Dhillon, who heads the strategic Kashmir-based XV corps, started Operation 'Maa' whereby a local terrorist trapped in an encounter is made to talk to his mother in a bid to convince him to return to his normal life. 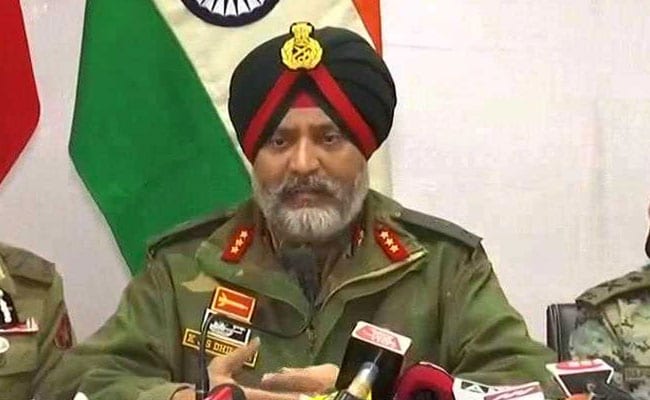 The "remarkable" decrease in the number of local youths joining various terror groups in Jammu and Kashmir has been a result of Operation 'Maa' launched by the army, which also targeted the leaderships of outfits "in a people friendly manner", a top army officer said in Srinagar.

Lieutenant General Kanwal Jeet Singh Dhillon, who heads the strategic Kashmir-based XV corps, started Operation 'Maa' whereby a local terrorist trapped in an encounter is made to talk to his mother in a bid to convince him to return to his normal life.

"Nothing is lost until your mother can't find it," Lt Gen Dhillon said while explaining that the results of the operation were "worth noting".

"In all operations, we extend every opportunity to local terrorists to 'return'. Half way through, the encounters are halted and the parents or society elders are involved to urge the trapped local terrorist to 'return'. This is Operation 'Maa' and we have been successful many times," Lt Gen Dhillon told news agency Press Trust of India in a written reply.

However, details were not made available by the army as this could jeopardise the safety of former terrorists who are inching towards living normal, peaceful lives in the national mainstream.

He said effective operations, especially against the leaderships of terrorist outfits, are the result of the determined pursuit of joint counter terrorist operations "in a people friendly manner".

According to a report compiled recently by security agencies, on an average only five youths joined terror groups every month since the special status of the erstwhile state was revoked over six months ago and it was bifurcated into two Union Territories - Jammu and Kashmir, and Ladakh - whereas the average figure before August 5, 2019 was 14 per month.

Lt Gen Dhillon also believes that successful operations by security forces, which led to "elimination" of 64 per cent new recruits during their first year of joining terror groups, has also acted as a deterrent.

"As a result, the recruitment of local boys in 2019 has been nearly half in comparison to 2018 and joining terrorist tanzeems (organisations) has become a non-lucrative option for the youth," he said.

Before August 5, 2019, funeral gatherings of killed terrorists used to be high and sometimes had more than 10,000 people, the report pointed out, adding that such gatherings had become fertile grounds for recruitment of youths into terror groups.

However, there has been a sharp decline in such tendencies and has impacted recruitment of local boys in various terror groups which has come down drastically, the report, which has been collated by various security agencies, said.

"There were instances (after August 5, 2019) when terrorists were buried and funeral was attended by just by a dozen of close relatives," it said.