"So happy to bring you the first look of my biggest test ever," tweeted John Abraham 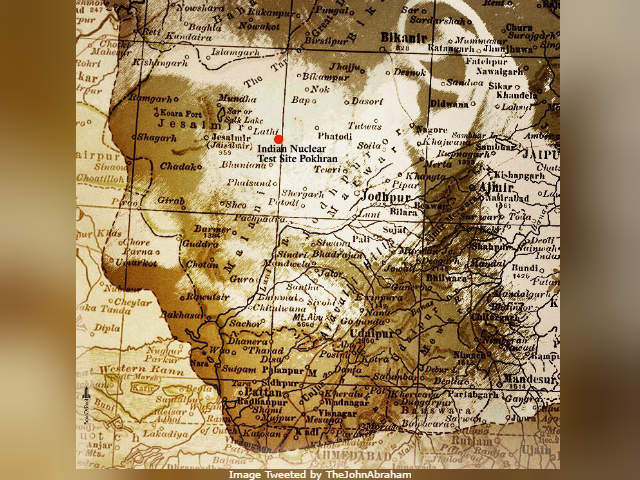 New Delhi: Actor John Abraham had fans and followers excited as he shared the first look of his new film, Parmanu - The Story Of Pokhran on Thursday morning. "So happy to bring you the first look of my biggest test ever," tweeted the 44-year-old actor, when he posted the first poster of the movie. As the name suggests, Parmanu is based on the nuclear tests conducted at the Indian army's Pokhran Test Range in May 1998. It was India's second nuclear test after the first one was conducted in 1974. Karan Johar was one of the first celebrities to wish the actor luck for Parmanu. "Congratulations John!! Am sure it will be a solid film!!! Lots of love," tweeted the 45-year-old filmmaker. In Parmanu, John Abraham co-stars with Diana Penty and Boman Irani, who are cast in key roles.

So happy to bring you the first look of my biggest test ever. #ParmanuFirstLook@johnabrahament@kriarj@ParmanuTheMoviepic.twitter.com/6lT18U02fQ

Meanwhile, Diana said she's thrilled to introduce the movie to her followers. "Excited to bring you this one," she tweeted along with the poster.

The Madras Cafe actor shared an update when the film went on floors in May. "Day 1.. Parmanu... The Story of Pokhran. Our biggest test ever," is what he tweeted from the sets of the film along with the photograph of a clapboard.

Day 1.. Parmanu..The Story of Pokhran. Our biggest test ever!!! @johnabrahament@kriarj#Parmanupic.twitter.com/d6gN2n6OeI

Promoted
Listen to the latest songs, only on JioSaavn.com
Director Abhishek Sharma told news agency PTI that he's glad to have collaborated with the Dishoom actor for the movie. Talking about the story, he told PTI: "This story is one of the resilience and gumption that was shown by our national agencies to achieve one of the most critical achievements of the 20th century for our country."