Parliament LIVE Updates- "We Have No Role In Karnataka Crisis": Rajnath Singh In Parliament

Taking a dig at former Congress President Rahul Gandhi, Rajnath Singh said the campaign of tendering resignation was started by him and it had nothing to do with the Bharatiya Janata Party (BJP). 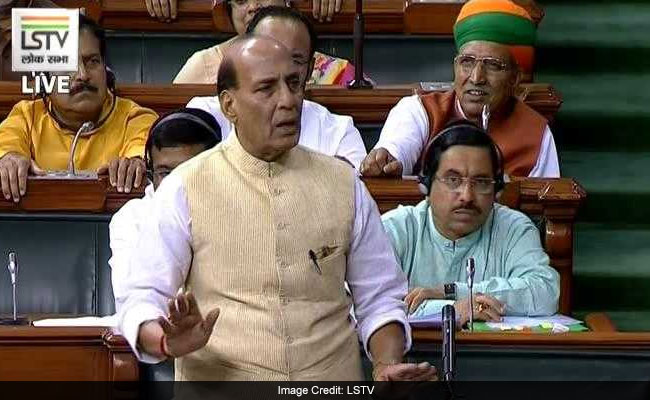 Rajnath Singh said his party did not believe in the politics of horse-trading or inducements.

Union Minister Rajnath Singh today said that the BJP had nothing to do with the situation in Karnataka where several Congress and JD-S MLAs have quit, puttng the coalition government in a crisis. Taking a dig at former Congress President Rahul Gandhi, Rajnath Singh said the campaign of tendering resignation was started by him and it had nothing to do with the Bharatiya Janata Party (BJP). The Minister was responding to Congress leader Adhir Ranjan Chowdhury who accused the BJP of trying to destabilize the Congress-JD(S) coalition in Karnataka. Rajnath Singh said his party did not believe in the politics of horse-trading or inducements. "Whatever is happening in Karnataka, our party has nothing to do with it. Our party is fully committed to the dignity of parliamentary democracy," he said.

Here are the LIVE Updates from the Parliament Session:

Jul 08, 2019 13:57 (IST)
Union Minister Rajnath Singh today asserted in parliament that the ruling BJP had "nothing to do with" the crisis in Karnataka, where the Congress-Janata Dal Secular coalition is fighting for survival after multiple resignations. "Our party does not put pressure on any other party's lawmaker or legislator. It is Rahul Gandhi who started the resignation spree," Rajnath Singh said in the Lok Sabha.
Jul 08, 2019 13:56 (IST)
The legislation seeks to establish a National DNA Data Bank and Regional DNA Data Banks. The bill envisages that every data bank will maintain indices like the crime scene index, suspects'' or undertrials'' index, offenders'' index, missing persons'' index and unknown deceased persons'' index.
Jul 08, 2019 13:56 (IST)
Minister for Science and Technology Harsh Vardhan, who introduced the bill, said there is "no serious substance" in the concerns raised by members. He also pointed out that several rounds of consultations have been undertaken and the measure has been pending for nearly a decade. He reminded members that a similar bill was passed by the previous Lok Sabha too after long deliberations.
Jul 08, 2019 13:55 (IST)
Describing the draft law as "flawed", he said there is no provision of consent on the storage of DNA data. Shashi Tharoor (Congress) alleged that the bill will institutionalise a "surveillance state" and suggested that first a data protection law should be put in place. "You cannot put the cart before the horse," he said.
Jul 08, 2019 13:55 (IST)
Opposing the introduction of the bill, Congress leader in Lok Sabha Adhir Ranjan Chowdhury said, the bill violates fundamental rights as DNA of undertrials can be collected without court orders.
Jul 08, 2019 13:55 (IST)
The DNA Technology Regulation Bill, which seeks to control the use of DNA technology for mestablishing the identity of a person, was introduced in Lok Sabha today amid questions being raised by opposition parties on its provisions. A similar bill was passed in Lok Sabha in January, but lapsed as it could not be cleared in Rajya Sabha. The bill had then lapsed with the dissolution of the previous Lok Sabha.
Jul 08, 2019 13:23 (IST)
The lower house of the Parliament will today take up a discussion on the Union Budget 2019 that was presented by Finance Minister Nirmala Sitharaman.