Parliament Session Live Updates: Nirmala Sitaraman slammed the Opposition and accused them of constantly alleging a false narrative that the government only worked for cronies.

Parliament Session Updates: Saturday will mark the end of the first part of the Budget session.

Home Minister Amit Shah asserted in the Lok Sabha on Saturday that the Modi government has done more for Jammu and Kashmir since Article 370 was scrapped in August 2019 than those who ruled it for generations, as he reeled out statistics to assert that its development has been the government's top priority.

Replying to a discussion on the Jammu and Kashmir Reorganisation (Amendment) Bill, he also slammed some opposition members for their claim that the proposed law negates the hopes of the region getting back its erstwhile statehood, PTI reported.

Finance Minister Nirmala Sitharaman today said that the ongoing Covid pandemic did not deter the Central government from taking measures for reforms that are necessary for sustaining long term growth for this country.

"I would like to highlight - stimulus plus reforms. The pandemic did not deter us from taking up reforms that would sustain long term growth. We have taken not just one-off reforms, not just now and then, but reforms rivetted in a policy which will give a neat background, a layout spread before the Parliament for people to know that this is a reform that will lay a path for India to be one of the top economies of the world in the coming decade and further," the Finance Minister said while replying to the discussion on the Union Budget in Lok Sabha.

Ms Sitharaman said that these reforms will lay a path for India to be one of the top economies of the world in the coming decade and further.

Ms Sitaraman, while replying to the discussion on the Union Budget in Rajya Sabha on Friday, slammed the Opposition and accused them of constantly alleging a false narrative that the government only worked for cronies and said several of the Centre''s schemes were for the poor.

She also said the Union Budget 2021-22 is the instrument through which Aatmanirbhar Bharat is to be attained and asserted that the government is also looking at "long term sustainable growth".

Finance Minister had presented the Union Budget 2021-22 in the Parliament on February 1.

Here are the Live Updates on Parliament Budget Session 2021:

Feb 13, 2021 23:11 (IST)
Lok Sabha Witnesses 99.5% Productivity As First Part Of Budget Session Concludes
The Lok Sabha clocked 99.5 per cent productivity during the first phase of the two-part Budget session of Parliament, Lok Sabha Secretariat said on Saturday, reported news agency ANI. The Budget Session of Parliament, which commenced with the address of President Ram Nath Kovind on January 29, concluded today. Lok Sabha Speaker Om Birla, while interacting with the media in Parliament said that the Budget Session of Parliament ran smoothly and transacted important business even beyond midnight.
Feb 13, 2021 22:08 (IST)
Congress MP Gives Privilege Notice Against Nirmala Sitharaman For "Doomsday Man" Remark
Congress MP Prathapan gave a notice for privilege motion in Lok Sabha against Finance Minister Nirmala Sitharaman for her "Doomsday man of India" remark against Rahul Gandhi during her response to the budget debate on Saturday in Lok Sabha, reported news agency ANI. Speaking on the matter, Congress MP Adhir Ranjan Chowdhury, said Ms Sitharaman should not indulge in such unparliamentary activity inside the House.
Feb 13, 2021 21:53 (IST)
PM Modi Lauds Amit Shah, Nirmala Sitharaman's Lok Sabha Speeches
Prime Minister Narendra Modi on Saturday lauded Home Minister Amit Shah's address in Lok Sabha while piloting a bill related to Jammu and Kashmir and said his "wonderful speech" was extensive in detail and highlighted the government's efforts for Jammu, Kashmir and Ladakh, reported news agency PTI. In tweets, PM Modi also praised Finance Minister Nirmala Sitharaman's "comprehensive" reply in Lok Sabha to a discussion on the Union Budget, saying she talks about how it benefits every section of society as well as giving an impetus to the "Aatmanibhar Bharat" movement.
Feb 13, 2021 19:46 (IST)
Government Introduces Bill In Lok Sabha To Abolish Five Tribunals
A bill to abolish some tribunals where public at large is not a litigant was introduced in the Lok Sabha by Minister of State for Finance Anurag Singh Thakur on Wednesday, reported news agency PTI. The government proposed to wind up five tribunals, including Airport Appellate Tribunal, Authority for Advance Rulings and Intellectual Property Appellate Board. Besides, Appellate Tribunal under the Cinematograph Act and Plant Varieties Protection Appellate Tribunal will be abolished. The proposed Bill seeks to amend the Cinematograph Act, 1952, the Customs Act, 1962, the Airports Authority of India Act, 1994, the Trade Marks Act, 1999 and the Protection of Plant Varieties and Farmers' Rights Act, 2001 and certain other Acts.
Feb 13, 2021 19:32 (IST)
BJP, Congress Lok Sabha MPs Raise Myanmar Situation During Zero Hour
Congress leader Manish Tewari and BJP's Tapir Gao on Saturday pitched for the restoration of democracy in Myanmar, reported news agency PTI. The two members were speaking in the Lok Sabha during the Zero Hour. Mr Tewari said India is the largest democracy and it stands for certain values and ideals. Tapir Gao said Government of India should lead to restore democracy in Myanmar because India has a 1000 km-long border with Myanmar.
Feb 13, 2021 17:06 (IST)

Feb 13, 2021 13:34 (IST)
Rahul Gandhi becoming ''doomsday man'' for India says Nirmala Sitharaman
Finance Minister Nirmala Sitharaman on Saturday hit out at Congress leader Rahul Gandhi saying he is becoming a "doomsday man" for India by constantly insulting constitutional functionaries and creating fake narratives on various issues, PTI reported.
Replying to the general discussion on Budget in Lok Sabha, she said the former Congress chief was creating fake narratives but does not have patience to listen to replies on allegations levelled against the government.
"We need to recognise these two tendencies of the Congress party... this makes it clear that their belief in a democratically elected Parliamentary system is completely finished," Ms Sitharaman said.
Feb 13, 2021 12:13 (IST)

The dreams that you had shown after the abrogation of Article 370 have not been fulfilled. J&K has not returned to normalcy. More than Rs 90,000 cr of local business has finished. We want you to tell us how will you improve things in J&K: AR Chowdhury, Leader of Congress in LS pic.twitter.com/i7Qjr23spA 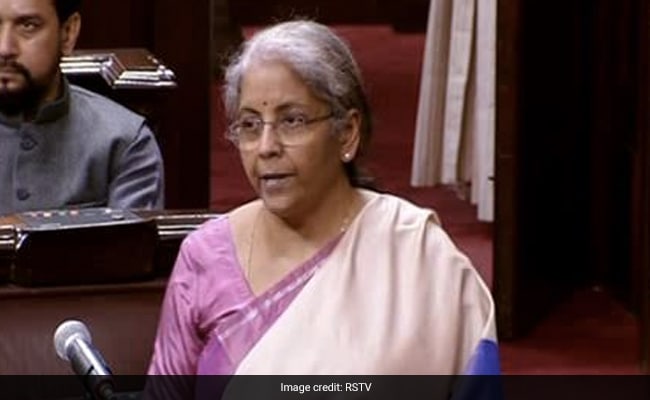 Nirmala Sitaraman, while replying to the discussion on the Union Budget in Rajya Sabha on Friday, slammed the Opposition and accused them of constantly alleging a false narrative that the government only worked for cronies and said several of the Centre's schemes were for the poor.
Feb 13, 2021 10:18 (IST)
Finance Minister To Reply On Budget Discussion In Lok Sabha Today
Finance minister Nirmala Sitharaman will reply to the discussion on the Union Budget in Lok Sabha today. Saturday will also mark the end of the first part of the Budget session of the Parliament.
Feb 13, 2021 10:17 (IST)
For news on yesterday's developments, click here

Mallikarjun Kharge, Flanked By Who's Who Of Congress, Files Nomination