Tearful Farewell Given To Pandit Jasraj In US 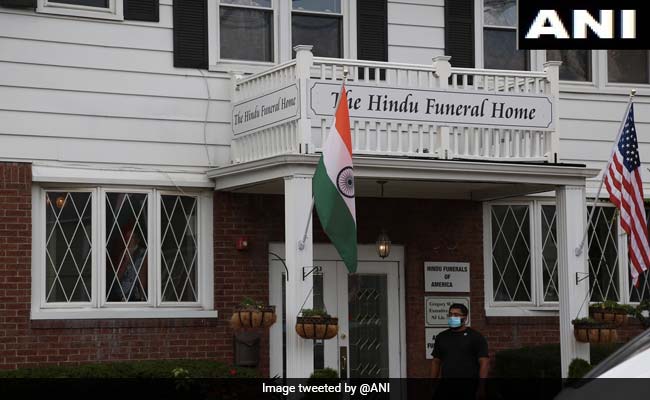 A number of mourners gathered at the Highland Park Funeral Home in New Jersey.

A number of of mourners gathered at the Highland Park Funeral Home in New Jersey on Monday to pay their last respects to music maestro Pandit Jasraj. The Indian classical vocalist died of a cardiac arrest in his New Jersey residence.

Randhir Jaiswal, Consul General New York, along with Deputy Consul General Shatrughan Sinha, paid a visit to the legend in New Jersey. "As our nation mourns the death of the legend, we are making sure to assist the family to take back the mortal remains to India, so that he can be put to rest in the best possible manner," Mr Jaiswal told ANI.

Pandit Jasraj was in the United States when the coronavirus-induced lockdown was enforced in India and he decided to stay back. Since he spent half-a-year in his New Jersey home, he has left a void among those who knew him more than being just a legend.

New Jersey realtor Alka Aneja was one of the many showed up at the visitation ceremony. Ms Aneja was the one who had sold the house to Pandit Jasraj, but her association with the maestro was beyond business. "He called me his adopted daughter and also taught me music, he was a beautiful soul. He is such a nice and humble person. From what I heard, he was teaching his students last night. Music was in his blood till the last second," Ms Alka told ANI.

Like Ms Alka, Mr Hari is still processing the demise of the vocalist. He was one of the few disciples who was present at Pandit Jasraj's New Jersey home on Monday morning.

"It seems unreal--it has not really sunk in. We are still trying to process this and figure out how we are going to move forward without him being here. He is just an incredible soul; he has given us so much love, knowledge," he said.

Pandit Jasraj's musical career spanned eight decades across continents. He received several prestigious awards, including the Padma Vibhushan, India's second-highest civilian honour, as well as Padma Bhushan and Padma Shri awards. Apart from his being and accolades, it's that bond with India that his disciples will miss in the US.

"Pandit Jasraj was on a video conference with us last evening, he told one of the vocalists that he was very happy with the performer today," Ms Renu, a resident of Long Island, New York told ANI.