Pakistan will resolve all issues with India through talks: Nawaz Sharif 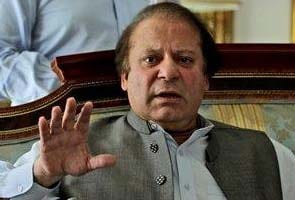 Sharif, whose PML-N party is set to form the government following its victory in the May 11 polls, made the remarks when Indian High Commissioner Sharat Sabharwal called on him at his residence at Raiwind in Lahore.

Punjab Chief Minister-designate Shahbaz Sharif and senior PML-N leader Ishaq Dar, who is expected to be made federal Finance Minister, were present during the meeting.

Since his party's victory in the polls, Sharif has spoken frequently about his plans to improve relations with India.

The PML-N chief had said he is keen on resuming the India-Pakistan peace process that was interrupted in 1999 by then army chief Pervez Musharraf, who ousted Sharif's government in a military coup.

Promoted
Listen to the latest songs, only on JioSaavn.com
However, during a recent meeting with Sharif, army chief General Ashfaq Parvez Kayani reportedly asked the PML-N chief to "go slow" on relations with India.
.