On Sunday, BSF released a thermal-imagery footage, showing the destruction of a Pak post across the border, in retaliation to the unprovoked firing.

Over 700 such ceasefire violations by Pak have already been reported this year. (file photo)

Jammu: The Pakistani rangers today continued shelling at several places along the international border (IB) in Jammu and Kashmir affecting 30 BSF border outposts and over two dozen villages, police said. Seven people including a 70-year-old woman have been injured in the ceasefire violation. A BSF soldier also suffered injuries in the incident.

Ceasefire violation was reported in Jammu and Samba districts of the state.

"People have been advised to remain indoors till the situation returns to normal," a police officer was quoted by news agency IANS.

All schools close to the international border have been closed as a precautionary measure.

Inspector General of Police, Jammu, S D Singh Jamwal said one person was injured in the fresh firing in the worst-hit Arnia sector of Jammu district.

Madan Lal Bhagat, a resident of Pindi Charkan village of Arnia, was hit by splinters in the abdomen and foot after a mortar shell hit his house in the early hours today, the officials said adding he has been admitted to the Government Medical College.

Police said a 70-year-old woman identified as Kaushalya Devi was also injured in the firing.

The Pakistani side is carrying out indiscriminate shelling and firing in Arnia, R.S.Pura and Ramgarh sectors, the officer said. It started around 7 p.m. on Monday in Arnia and later extended to the two other sectors.

"The Border Security Force has been retaliating strongly and effectively as intermittent firing exchanges continue in these areas," he added.

An eight-month-old child lost his life after he was hit by a stray bullet during ceasefire violation by Pakistan in Keri Battal area of Akhnoor near LOC. 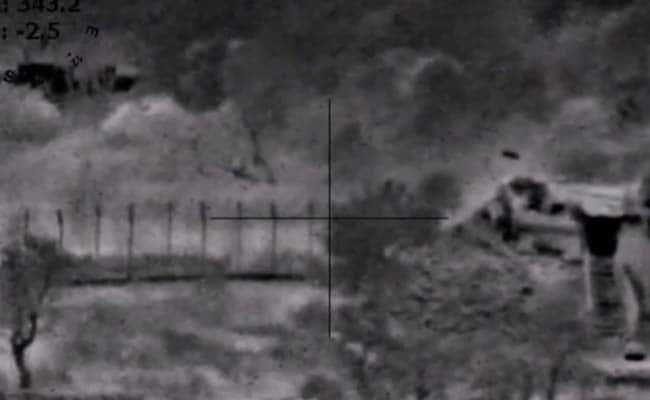 On Sunday, BSF released thermal-imagery footage, showing the destruction of a Pak picket across the border.

Six people, including a policeman, a woman and four others were injured in the Pakistani shelling in Arnia sector on Monday.

The ceasefire violation comes two days after Pakistani forces were forced to "plead for ceasefire" after Indian troops retaliated forcefully to heavy shelling and firing from across the border. On Sunday, Pakistan Rangers called up the BSF unit in Jammu and requested for a ceasefire, a senior officer of the BSF said.

The BSF also released a 19-second thermal-imagery footage, showing the destruction of a Pakistani picket across the border, in retaliation to the unprovoked firing and shelling along the International Border.

The state has witnessed a spurt in Pakistani shelling and firing along the International Border and the Line of Control (LoC) this year. Over 700 such incidents have already been reported this year, which have left 38 people, including 18 security personnel, dead and dozens injured.

(with inputs from agencies)
Comments
ceasefire violationJammu and Kashmir