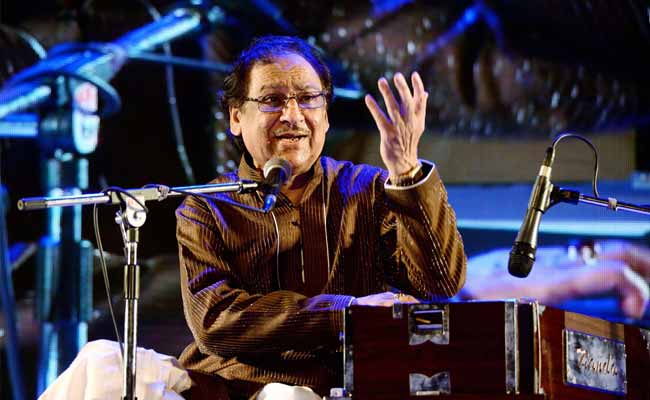 Ghazal maestro Ghulam Ali performing in a program in Thiruvananthapuram in Kerala on Friday, January 15, 2016. (Press Trust of India photo)

Thiruvananthapuram: Protests by Shiv Sena activists notwithstanding, Pakistani ghazal legend Ghulam Ali today enthralled music buffs in Thiruvananthapuram as he belted out his popular numbers before a packed house.

The 75-year-old maestro, who is in on his maiden visit to the 'God's Own Country,' mesmerised the audience at the Nishagandhi Auditorium in Thiruvananthapuram today evening.

He was accompanied by famed ghazal singer Pandit Vishwanath and son Aamir Ali. More than the 5,000 strong music lovers enjoyed the evening with applause.

The singer began by singing his famous number 'Chup ke chup ke' from the Bollywood movie "Nikah" along with Mr Aamir.

Sena activists, who had demanded cancellation of the concert in the wake of the Pathankot terror strike, were stopped nearby the venue by the police.

Water cannons were used to disperse around 200 Sena activists, who also burnt a Pakistan flag as a mark of protest, police said.

Mr Ali, whose concert in Mumbai had to be cancelled last year following protests by the Sena, was accorded a public reception here yesterday, which was attended by a galaxy of state leaders including Chief Minister Oommen Chandy.

Mr Ali is also scheduled to perform in Kozhikode district on January 17.

He is in Kerala on an invitation by socio-cultural organisation 'Swaralaya' and the programmes were arranged in association with Grand Kerala Shopping Festival Directorate.