India extended the invitation to Pakistan to attend the regional conference on Afghanistan next week, expected to be hosted by Indian National Security Advisor Ajit Doval. 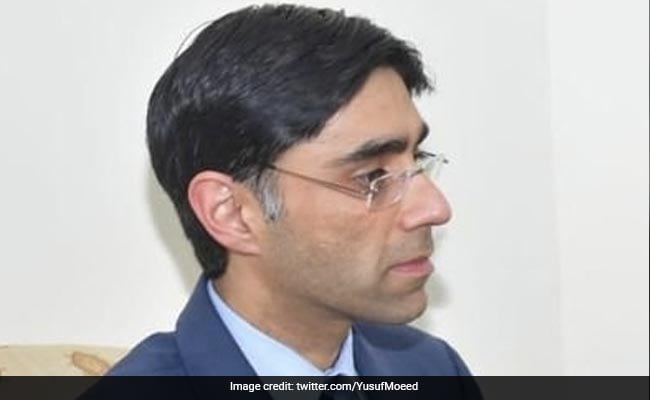 Pakistan National Security Advisor (NSA) Moeed Yusuf on Tuesday said he would not travel to India to attend a conference hosted by it on Afghanistan, as he dismissed New Delhi's role as a "peacemaker" in the war-torn neighbouring nation.

India extended the invitation to Pakistan to attend the regional conference on Afghanistan next week, expected to be hosted by Indian NSA Ajit Doval.

The Taliban seized power in Afghanistan on August 15, two weeks before the US was set to complete its troop withdrawal after a costly two-decade war.

"I will not go. I am not going. A spoiler can't become a peacemaker," Yusuf said in response to a question about whether he will be attending the meeting hosted by India.

Earlier, Pakistan's Foreign Office confirmed the invitation from India but said the decision would be taken at an appropriate time.

Foreign Minister Shah Mahmood Qureshi had earlier said that Pakistan's decision would be based on keeping in view the current state of relationship between the two nuclear-armed neighbours.

A curt no by Yusuf laid to rest a possibility of thaw in ties between Pakistan and India.

Ties between India and Pakistan nose-dived after a terror attack on the Pathankot Air Force base in 2016 by terror groups based in the neighbouring country. Subsequent attacks, including one on an Indian Army camp in Uri, further deteriorated the relationship.

The relationship dipped further after India's war planes pounded a Jaish-e-Mohammed terrorist training camp deep inside Pakistan on February 26, 2019 in response to the Pulwama terror attack in which 40 CRPF jawans were killed.

The relations deteriorated after India announced withdrawing special powers of Jammu and Kashmir and bifurcation of the state into two union territories in August, 2019.

India has told Pakistan that it desires normal neighbourly relations with Islamabad in an environment free of terror, hostility and violence.

Yusuf said that Pakistan, unlike the West, could not disengage with Afghanistan due to its regional proximity.

"It may be a luxury for the Western world sitting 10,000 miles away (to stay away from Afghanistan) but we do not have any option to disengage from Afghanistan," he said.

He reiterated Pakistan's stance that the world should coordinate and constructively engage with the present Afghan government to avert a humanitarian crisis.