Venkaiah Naidu said while there is a broad degree of commonality over rapid economic growth as an instrument of bettering the lives of the people, there is much more to the progress of the nation. 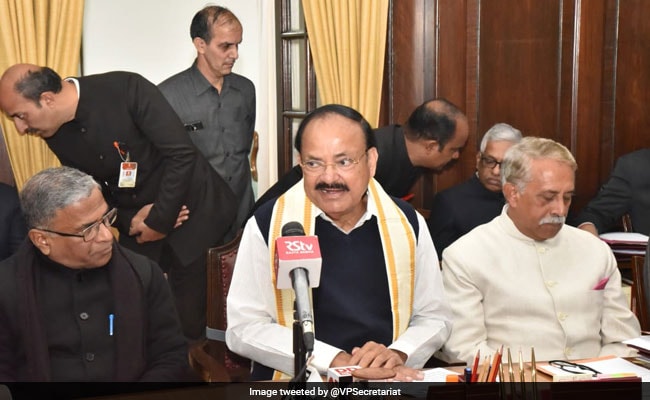 He said this after releasing the Rajya Sabha Calendar 2019 in the presence of senior leaders of different parties in Parliament House.

Referring to the persisting turbulence in the Upper House, Mr Naidu invoked 12 preceding chairmen of the Rajya Sabha who insisted on ensuring effective functioning of the House so as to contribute to nation building.

"I am pained by our inability to ensure convergence of different agendas into a national agenda. No nation can emerge stronger without such a shared parliamentary agenda," he said after the calendar launch.

Rajya Sabha Deputy Chairman Harivansh, Leader of the House and Finance Minister Arun Jaitley and Leader of the Opposition Ghulam Nabi Azad were also present at the launch.

Mr Naidu said while there is a broad degree of commonality over rapid economic growth as an instrument of bettering the lives of the people, there is much more to the progress of the nation.

"Parliamentary institutions can't be held captive to the competing agendas. We can't afford to lose any more time in lending a degree of maturity to our democratic processes and institutions.

"The civility of proceedings in parliamentary institutions is a certain barometer of an aspiring nation finding it's feet and fulfilling it's quest," he said.

The 2019 calendar features 65 leaders, including 13 former chairmen, 12 former deputy chairpersons, 26 leaders of the House and 14 leaders of the opposition, since the inception of the Upper House in 1952.

Referring to this, Mr Naidu noted that the calendar is a chronicle of political changes and the history of the Rajya Sabha since 1952.

Describing the calendar as innovative, imaginative and inspiring, the chairman recalled what his predecessors had said about the functioning of the House and expressed hope that it would serve as a reminder to all the leaders and members about the need for its effective functioning.

The calendar features one chairman on each page along with the quotes of what they had said about the expectations from the House and its members.

The calendar reveals that the Upper House did not have a leader of opposition for 34 years since the Rajya Sabha came into being.

Late Shyam Nandan Mishra of the Congress-O was the first LoP from December, 1969 to March 1971.

The institution of LoP in Rajya Sabha was formally created through an Act in 1977 and late Bhola Pawan Shastry was the first LoP from February to March in 1978.

Former prime minister Manmohan Singh has the distinction of being the leader of opposition and leader of the House in Rajya Sabha for the longest duration of over six years and 10 years respectively.

Mr Naidu also recalled that the first chairman of the Rajya Sabha, S Radhakrishnan, had urged members to do everything to justify the creation of the second chamber of Parliament.

While Dr Zakir Husain stressed on quality and fruitful deliberation as a measure of contribution to national life, VV Giri hoped that a national consensus would emerge from the daily deliberations, he said.

Mr Naidu said KR Narayanan hoped that if debates in the House are centred around the poorest man, it will result in the automatic emergence of a minimum basis on which all can agree.

Bhairon Singh Shekhawat hoped the Upper House to be a watchdog on the affairs of the nation and also as a guide to the Union and states to achieve the objectives of economic growth, effective governance and public welfare, he said.

Mr Naidu also recalled his immediate predecessor Hamid Ansari and urged members to be  aware of the changing need in legislations on account of the reality in transition of public mood from passive receptivity to active quest.

He said that "as a humble successor to these 12 men of wisdom, over the last 17 months, I have been trying to impress upon the members only three words 'Discuss, Debate and Decide'."

"My anguish over the state of affairs in the House so far had only limited impact," Mr Naidu said

Secretary General, Rajya Sabha, Desh Deepak Verma, explained the theme of the calendar and said on account of the vastness of information and its uniqueness, the calendar is a "learner's delight".