On his birthday, P Chidambaram also received a letter from his son Karti Chidambaram, which contained several not-so-subtle jabs at the centre, including a reference to PM Modi's "56-inch chest" and the 100 days of the PM's second term in power 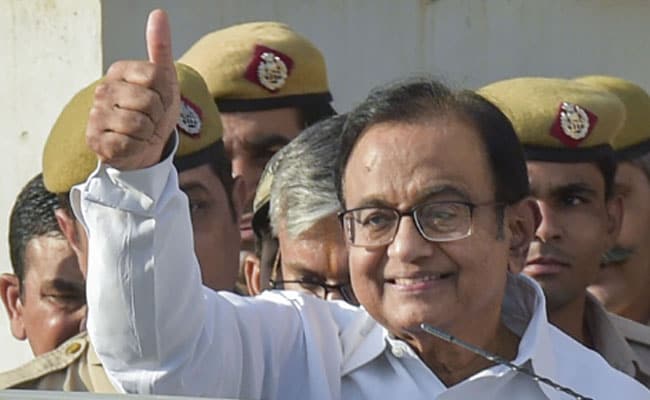 Former Union Minister P Chidambaram celebrated his 74th birthday today in Tihar Jail with a tweet on the condition of the economy and a letter from his son, Karti Chidambaram. The Congress veteran, whose tweet last week warned that only bold action from the centre could revive the ailing economy, pointed to a negative growth of exports of -6.05 per cent for August 2019 as signs that Prime Minister Narendra Modi's ambitious goal of making India a $5-trillion economy might be out of reach.

Declaring himself "deeply concerned", Mr Chidambaram also reminded the government that no country had ever managed to achieve 8 per cent GDP growth - seen by many experts as necessary to hit the $5 trillion mark - without exports at a staggering 20 per cent per year.

"My thoughts today are about the economy. Just one statistic tells the story. Export growth in August was -6.5%. No country has achieved GDP growth of 8% without exports growing at 20% a year," the former Finance Minister said, adding, "May God bless this country".

My thoughts today are about the economy. Just one statistic tells the story. Export growth in August was -6.05%.

No country has achieved GDP growth of 8% without exports growing at 20% a year.

On Thursday Union Commerce Minister Piyush Goyal made identical remarks when he said India had to reach 19-20 per cent export growth levels to reach the $5 trillion mark.

"My family have brought me greetings from friends, party colleagues and well-wishers. I am reminded that I am 74 years old. Indeed I am but at heart I feel 74 years young. Thank you all, my spirits have been lifted higher," his tweet read.

On the occasion, Mr Chidambaram also received an open letter from his son Karti Chidambaram, which contained several not-so-subtle jabs at the centre, including a reference to the Prime Minister's "56-inch chest" and the recently celebrated 100 days of PM Modi's second term in power.

The Congress veteran, jailed by a Delhi court on September 5 after the expiry of the CBI's 14-day custody in the INX Media case, has been active on social media, courtesy his family members who post on his behalf, despite the grim realities of his present situation.

Mr Chidambaram's frequent comments on the state of the economy echo those by another former Finance Minister and Congress veteran - former Prime Minister Manmohan Singh, who blamed "all-round mismanagement" by the centre for the condition of the economy.

Case Against 13 After Family Tries To "Get Rid" Of Baby Girl Born To Rape Survivor: Report