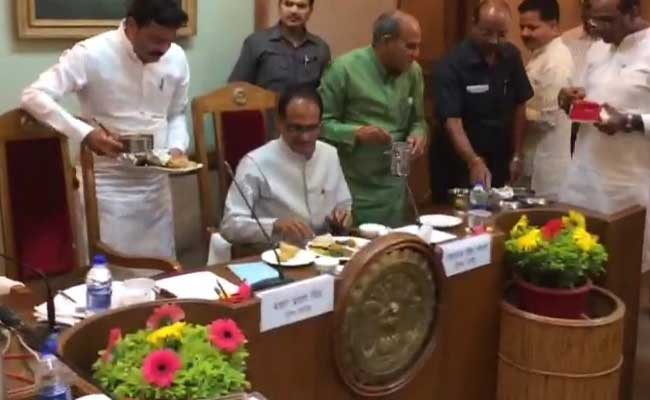 The "tiffin cabinet meet" as it was dubbed, was a novelty even for Shivraj Chouhan.

Bhopal: It was a cabinet meeting with a difference. The 27 ministers of Madhya Pradesh tucked into scrumptious aloo bonda (a deep-fried snack), daal, rice and rotis -- food that Chief Minister Shivraj Chouhan assured them was prepared personally by his wife Sadhna Singh.

The traffic was not one-way though. The ministers had brought in their own lunch-boxes too and all the goodies were shared.  "I had brought pakode ki sabji (curry of batter-fried vegetables), gulgule (a fried dessert) and a curry of methi (fenugreek leaves) and green peas," said Archana Chitnis, who holds the state's women and child development portfolio.

The "tiffin cabinet meet" as it was dubbed, was a novelty even for Mr Chouhan, who is well into his third consecutive term as the Chief Minister. But he told his ministerial colleagues that they should introduce the system in their constituencies, especially when they meet local leaders.

Assembly elections in the state are due next year, when the BJP will seek a fourth consecutive term. His sudden decision to hold the cabinet meeting over lunch is seen as a move to get things moving in the right direction.

Promoted
Listen to the latest songs, only on JioSaavn.com
Encouraging the ministers to get the local leaders open up to their problems over a meal, he said, "People should have tiffin meetings... everyone should work together, break bread together, take the state forward together," Mr Chouhan said.

But amid the lavish spread and bonhomie, the cabinet also took a crucial decision. The state became the first to move to a January to December financial year days after Prime Minister Narendra Modi suggested the shift at the meeting of Niti Aayog Governing Council. The meeting, held last month, was attended by most of the Chief Ministers.