Over 200 Rescued In Arunachal Pradesh And Assam, Flood Alert In Meghalaya

Siang river, which originates in Tibet and is known as Tsangpo in China, joins Lohit and Dibang rivers downstream to form the Brahmaputra in Assam. 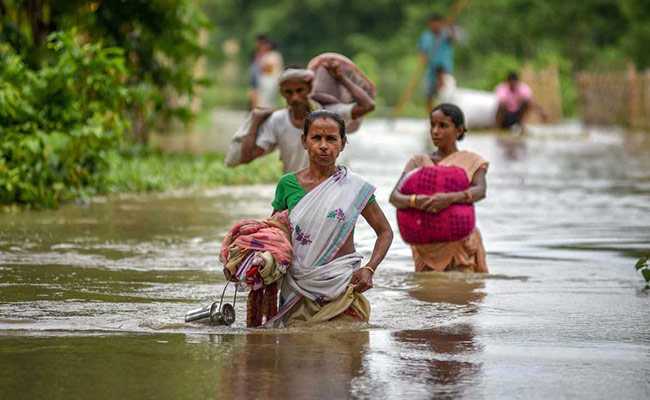 As many as 19 people were airlifted by the Air Force from a flooded Arunachal Pradesh island today and over 200 others rescued from Assam's Dhemaji district as Siang river, which originates in China, continued to swell due to rains in that country, officials said.

A flood alert was sounded in three Meghalaya districts too.

Siang river, which originates in Tibet and is known as Tsangpo in China, joins Lohit and Dibang rivers downstream to form the Brahmaputra in Assam.

The 19 rescued people - cattle-herders from Assam -- were stranded for over 24 hours in East Siang district of Arunachal Pradesh and the IAF operation followed a request by the district administration, its deputy commissioner Tamiyo Tatak said.

All 200 of them, including children, have been brought to safety, sources in Dhemaji administration said.

According to a Chinese government report, Tsangpo was in spate because of heavy rains. The various gauge and discharge stations on the Tsangpo had observed a discharge of 9,020 cumec water on Wednesday, official sources there said.

The administrations of East and Upper Siang districts of Arunachal Pradesh and Dhemaji, Lakhimpur and Dibrugarh districts in Assam had sounded alerts yesterday following the rise in water level in the river.

Over 1,000 families living along the river have been affected at Mebo area in East Siang, Arunachal MLA Lombo Tayeng said.

Informing that 15 families of Seram-Ramku village have lost their homes as the flood waters came gushing in, he said most of the inhabitants on the left bank had been rescued to safe places.

Tayeng assured that Rs 1 lakh each will be provided for their rehabilitation.

He also sent a report to Union Minister Kiren Rijiju for action and requested him to facilitate visit of an inter-ministerial central team to assess the situation.

In a circular, the East Siang DC cautioned people against venturing into Siang River for fishing and swimming.

According to sources in the Central Water Commission (CWC) the Siang river has become turbid.

In Lakhimpur and Dibrugarh districts of Assam precautionary measures were taken to prevent loss of life and property in view of a CWC warning, which predicted an "unprecedented" rise in the water level of Brahmaputra, official sources said.

The Inland Waterways department has been asked to keep boats ready for rescuing people from riverine and other vulnerable areas, they said.

The administration also instructed its officials to keep the army, paramilitary forces ready to reach out to the marooned people and stock food and medicine supplies for emergency situations.

In Meghalaya, the deputy commissioners of West Garo Hills, North Garo Hills and South West Garo Hills have been alerted and asked to keep the disaster management teams ready for any emergency situation in the next 24 hours, official said.

"As a result of the release of excess water by the Chinese government, there may be unprecedented rise in the water level of the Brahmaputra River," a revenue and disaster management official said in an urgent communication to the DCs of the three districts.

"We are monitoring the flood level with districts in upper Assam and CWC bulletins. People living in flood prone areas will be evacuated to upland areas identified by the District Disaster Management Authorities based on information on the water level," he said.

The excess water will, however, take a few days to reach the West Garo Hills district, he added.