Out Of Hospital, Rape-Accused Chinmayanand Now Complains Of Eye Problem

On Monday, Chinmayanand was discharged from Sanjay Gandhi Post Graduate Institute of Medical Sciences hospital, where he was admitted on September 23. 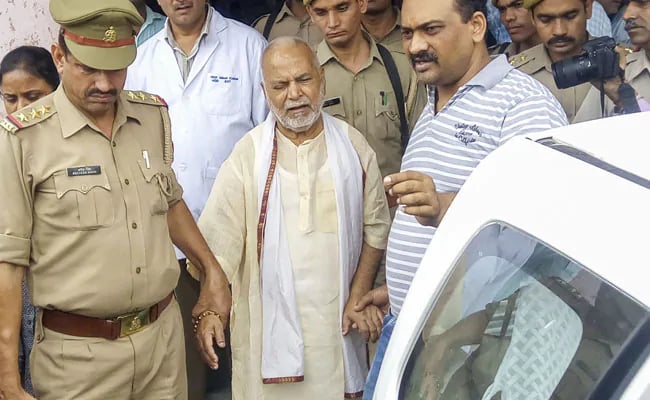 After getting discharged from a hospital in Lucknow on Monday, former Union minister Chinmayanand visited another hospital in the city complaining of an eye problem but was not admitted, officials said on Tuesday.

Chinmayanand, who has been accused of rape by a student in Uttar Pradesh's Shahjahanpur, was attended by doctors at the King George's Medical University (KGMU) and was called for a checkup on October 16, officials said.

"Chinmayanand had reached KGMU on Monday night complaining of a problem in the eye. He was attended to and was called for a checkup on Oct 16," KGMU media incharge Dr Sandeep Kumar said.

According to sources, Chinmayanand wanted to get admitted in the KGMU but was called later. He reached Shahjahanpur district jail at 2.30 am.

Dr Kumar declined to comment when asked about Chinmayanand's attempt to get himself admitted in the KGMU.

On Monday, Chinmayanand was discharged from Sanjay Gandhi Post Graduate Institute of Medical Sciences hospital, where he was admitted on September 23.

Earlier, doctors in Shahjahanpur had referred the BJP leader to Lucknow for angiography in view of his health condition, jail sources said.

In Shahjahanpur, Jail Superintendent Rakesh Kumar told PTI that Chinmayamand is lodged as a common prisoner and his "health appeared to be good".

"He took the breakfast this morning and his routine was like other prisoners," he added.