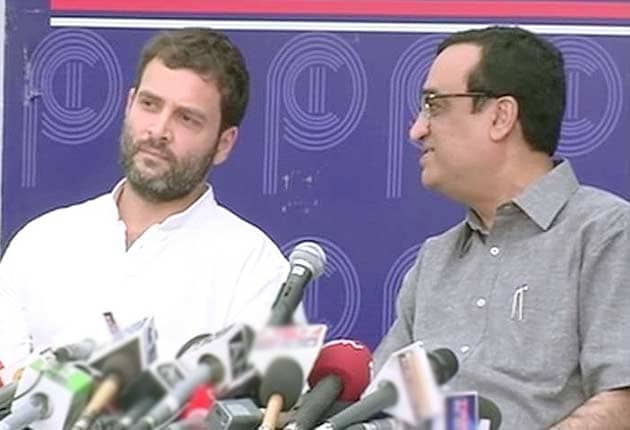 Rahul Gandhi speaks to journalists at the Press Club of India, New Delhi

New Delhi: Rahul Gandhi today denounced the controversial ordinance to negate the Supreme Court verdict on convicted lawmakers as "complete nonsense" and said it should be torn up and thrown away, in a huge embarrassment to his own government.

Sources say the government, which had pushed the ordinance and forwarded to President Pranab Mukherjee in questionable haste this week despite strong objections, will now withdraw the measure.

"I personally think what the government is doing on the ordinance is wrong. It was a political decision, every party does it, and there is a time to stop this nonsense," Rahul Gandhi said. "It is about time that political parties mind and stop making these type of compromises. If we actually want to stop corruption then we cannot make these compromises."

The 43-year-old Congress vice president did not waste much time trashing the ordinance moments after he made a surprise appearance at a press conference with party MP Ajay Maken.

After his remarks, Mr Maken said, "Rahul Gandhi has clarified the party's line. The party's view is supreme." Sources say once Prime Minister Manmohan Singh returns on Tuesday, the cabinet could formally withdraw the ordinance, as is the procedure.

Last night, even the President had called three union ministers including Law Minister Kapil Sibal to discuss his own reservations on the need to bring such an ordinance.

The ordinance overturns a Supreme Court disqualifying convicted MPs and MLAs, and allows them to stay on without a salary or voting rights, if a court stays their conviction.

The proposed move has ranged the ruling party against its own government ahead of polls in five states later this year and the national elections due by May.

Rahul Gandhi's comments came just after the Law Minister defended the ordinance in an interview to NDTV.

"We will honour the Supreme Court order. We are giving no protection to anybody. If any individual is convicted, it's only if he or she gets a stay of conviction or stay of sentence, can he be allowed to participate in proceedings. If no stay is given, by the Court , either of conviction or of sentence, he can not just sit in the house," Mr Sibal told NDTV.

The stand by a person widely seen as Congress party's Prime Ministerial face came as  a relief to several party members who had gone public with their criticism of the move.

Promoted
Listen to the latest songs, only on JioSaavn.com
"Most of us are against the ordinance, why the hurry?" asked Congress MP Sandeep Dikshit. Milind Deora, Digvijaya Singh, Priya Dutt and Anil Shastri had also questioned the rush to bring the ordinance.

The BJP had asked the President last evening to reject the ordinance, calling it "illegal, immoral and unconstitutional."