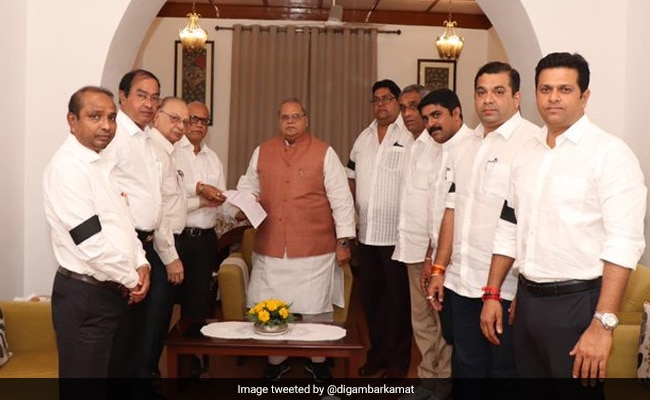 Opposition MLAs in Goa on Friday met Governor Satya Pal Malik on the arrest of a legislator here and urged him to intervene to prevent the "murder of democracy".

Independent MLA Rohan Khaunte was arrested on Wednesday for allegedly threatening BJP spokesperson Premanand Mahambrey in the Assembly premises. He was given bail later.

A delegation under Leader of Opposition Digambar Kamat met Governor Malik after staging a walkout from the Assembly over the issue and submitted a memorandum.

They urged the governor to direct the Pramod Sawant government to file a police complaint against Mahambrey.

"As a democracy is in peril, and as the fascist demon tries to rear its ugly head, you sir, as the Constitutional head of the state cannot simply wait and watch the events that are unfolding from the sidelines," the memorandum to Mr Malik read.

"We, therefore request you sir, to take cognizance of the above and seek your immediate intervention to prevent the murder of democracy," it added.

Mr Khaunte told news agency PTI the governor assured the delegation of appropriate action from his side.