Till date, the Indian Navy has brought back 2,386 Indians from Maldives to India under Operation Samudra Setu. 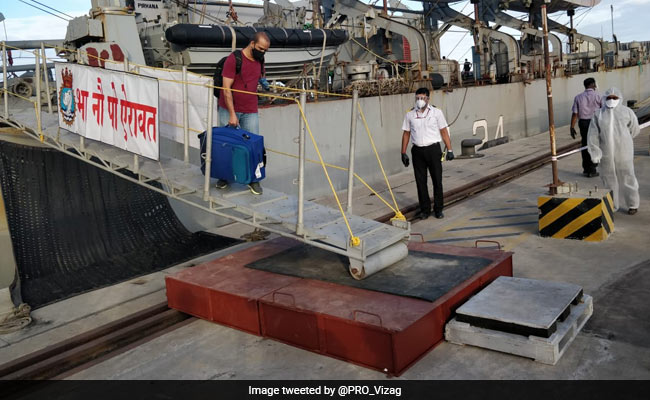 The passengers were screened by Port Health officials on arrival.

"Operation Samudra Setu" was initiated by the Indian Navy on May 8 to bring stranded citizens from abroad.

The Navy, in a press release, said, "The evacuees were received by local authorities at Tuticorin and arrangements were in place for speedy disembarkation, health screening, immigration and transportation of the evacuees."

Till date, the Indian Navy has brought back 2,386 Indians from Maldives to India under this operation.

A total of 64 people who arrived today are from Kanyakumari district while the rest were from other districts, said officials of the Tamil Nadu government.

Upon arrival, the passengers were screened by Port Health officials and their luggage was sanitised as part of COVID-19 health protocols.

On the issue of personal protective equipment (PPE) kits to all passengers by Port authorities, they boarded waiting buses and transited to the passenger terminal.

Later, before proceeding to their respective destinations in designated buses, self-declaration forms were obtained from the passengers and they were also asked to download and configure "Aarogya Setu" application in their cell phones.