One killed, four injured in alleged firing by CRPF during protests in Shopian 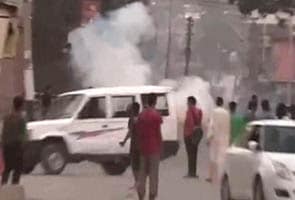 The police allegedly fired warning shots and teargas shells to disperse the crowd.

Shopian: One person has been killed and four others are injured after security forces allegedly opened fire on protesters in Shopian district in south Kashmir today.

People were protesting against the killing of four persons in a controversial shootout by the Central Reserve Police Force or CRPF on Saturday. The police have admitted that three out of the four men killed in the shootout were civilians.

The protesters today were demanding the removal of the CRPF camp and the arrest of the persons responsible for the four deaths. The police allegedly fired warning shots and teargas shells to disperse the crowd. A man named Rafiq Ahmad Rather was killed; four others were injured.

Soon after the death of the young man, protesters went on rampage and set ablaze the official residence of a senior officer in the town, a PTI report crediting sources said.

A curfew had been imposed in the south Kashmir town on Sunday following widespread clashes between security forces and agitated residents after the killings. It was lifted this morning.

However, a spontaneous strike was observed in the town with all shops and business establishments closed and transport off the roads.

The main opposition leader Mehbooba Mufti tried to visit Shopian today, but according to her party, the PDP, she was detained in neighbouring Pulwama. Police say she was stopped because of the security situation in Shopian. Ms Mufti has demanded an impartial probe into the killings of the four people.
Comments
ShopianCRPF