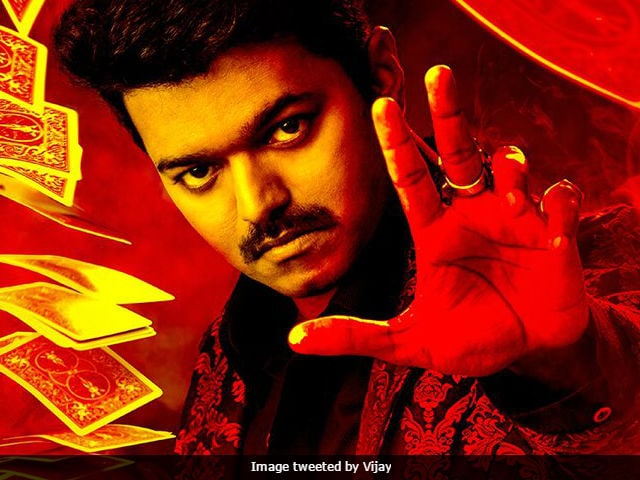 New Delhi: Tamil superstar Vijay started the celebrations of his 42nd birthday by releasing two new posters from his upcoming film Mersal on Twitter. Vijay's fans and colleagues loved the birthday surprise and extended their birthday wishes on the social networking site. Vijay's Puli co-star Kichcha Sudeepa wished him a lifetime of "happiness and smiles" while Tamil actor Prasanna hoped Vijay will "keep all that inspirations coming." Actor Navin Pauly sent best wished for Mersal. Vijay's fans also started trending '#HBDThalapathy' on Twitter with numerous tweets and birthday wishes. A glimpse of how celebs are celebrating Vijay's birthday on Twitter:

@actorvijay wishing u happiness and smiles .... Have a wonderful wonderful year ahead... Happy returns sir.

Many more happy returns of the day dear @actorvijay anna keep all that inspirations coming.. pic.twitter.com/8eUjDW1rCQ

#NewProfilePic My very first pic with him happy bday @actorvijay na a href="https://t.co/vViWb4et9b">pic.twitter.com/vViWb4et9b

Ahead of his birthday, Vijay introduced two of the three characters (a panchayat head, a doctor and a magician) he plays in Mersal. In the first poster, Vijay smiled rubbing dust on his hand, ready for a match while in the second poster, Vijay has a shrewd expression and can be seen throwing away a pack of cards (in style). Take a look at new Mersal posters:

Mersal reunites Vijay with his former co-stars Kajal Aggarwal (in Jilla) and Samantha Ruth Prabhu (in Kaththi ) and Nithya Menen. Mersal is Vijay's 61st film. Nithya Menen replaced actress Jyothika in the film after she opted out due to date issues. The film also stars Kovai Sarala and SJ Suryah.

Promoted
Listen to the latest songs, only on JioSaavn.com
Mersal is directed by Atlee Kumar, who also helmed Vijay's Theri co-starring Samtha Ruth Prabhu. The film is produced by Sri Thenandal Studios and its music has been composed by AR Rahman.

Vijay was last seen in Bairavaa.