Trending: Vijay Reveals First Look, Title Of His Next Film

Vijay's forthcoming film, which was initially referred to as Vijay 61, has been titled Mersal 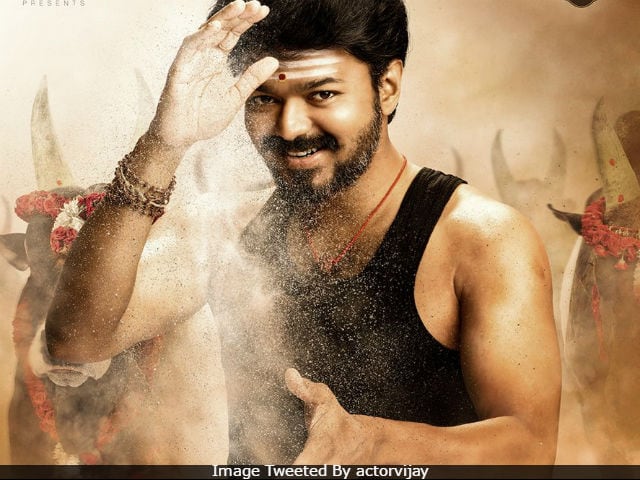 Vijay on the poster of Mersal (Image courtesy: actorvijay)

New Delhi: On the eve of Tamil superstar Vijay's 43rd birthday, the first look and title of his forthcoming film was released. Directed by Atlee, the film, which was initially referred to as Vijay 61, has been titled Mersal now. Vijay shared his first look from the film on Twitter with the caption that reads, "#Mersal," (the title of the film). Actresses Samantha Ruth Prabhu, Kajal Aggarwal and Nithya Menen star opposite Vijay in the film. Vijay plays a triple role in Mersal. News agency IANS reports that the three roles feature him as a panchayat head, a doctor and a magician. Mersal is reportedly Vijay's 61st Tamil film.

Veteran comedienne Kovai Sarala and SJ Suryah too are also part of the film. Mersal is Atlee's second film with Vijay after 2016's Tamil blockbuster Theri. The film has been extensively shot in the US, India and Europe. Mersal went on floor in February this year.

Samantha, Kajal Aggarwal and Nithya have also worked with Vijay previously. Nithya Menen replaced actress Jyothika in the film after she opted out due to date issues.

Mersal will be Vijay's second release of the year after Bairavaa, which hit the screens earlier this year. Actress Keerthy Suresh starred opposite Vijay in Bairavaa. The film received a huge opening in India and it set box office records in international markets too.

Promoted
Listen to the latest songs, only on JioSaavn.com
Mersal is bankrolled by Sri Thenandal Studios and Oscar-winning composer A R Rahman has given music for the film.

Mersal will be released during Diwali.