On 'Save Ganga' mission, former IIT professor battles for life 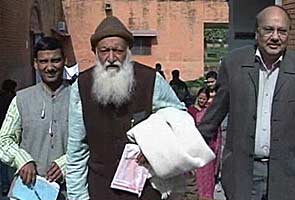 New Delhi: Noted environmentalist and former IIT professor GD Agarwal, who has been on a fast-unto-death since January 15 to save the Ganga river, is determined to continue his fast. He has been shifted to the All India Institute of Medical Sciences (AIIMS) where he is continuing his fast, his supporters said on Monday.

The 80-year-old activist was shifted to AIIMS in an air ambulance from Varanasi in Uttar Pradesh, after his condition had deteriorated.

"I am here to do a 'tapasya'. That is all. I am not here to indulge in any fights or other kinds of violence. I do not understand why the authorities are taking me away. They are claiming that I am sick. I can walk up to the sky and I have the stamina for that," Dr Agarwal had said before being admitted to AIIMS.

Dr Agarwal is demanding the government take strong measures to protect the Ganga river and its ecology and keep it uninterrupted.

According to doctors, he has been kept in the intensive care unit (ICU) and a team of doctor is monitoring his condition.

Tarun Agarwal, Dr Agarwal's nephew who is accompanying him, said he is physically week but mentally very tough and is determined to continue his fast.

"He won't break his fast till his demands are accepted. He is given drips but he is not eating anything. He is firm to continue his fast from the hospital," Tarun told IANS.

Dr Agarwal has served as a secretary of the Central Pollution Control Board, the country's premier anti-pollution body, and helped put together environmental legislation in India. This is his third fast-unto-death in last four years.

Besides, Dr Agarwal is against ongoing construction of dams/barrages/tunnels on Ganga which would totally destroy the natural flow regimes and quality of the river water, total failure of regulatory agencies in controlling discharge of urban and industrial wastes into the Ganga and complete lack of sensitivity of the government on these issues.

"He stopped taking water from March 9 and his condition deteriorated. It is a matter of great concern but the government remains totally unmoved," Magsaysay awardee Rajendra Singh told IANS.

Rajendra Singh resigned as the chairman NGRBA last week over "government's insensitivity towards Agarwal and gross negligence towards worsening state of the holy river".

Two other members of the NGRBA have also resigned over the issue. "We haven't heard anything from the government since we sent our resignation," said Singh.

Agarwal got support from anti-corruption crusader Anna Hazare, who met him at the AIIMS with Arvind Kejriwal and Manish Sisodia.

"Government is responsible for his condition. He has been demanding for long that Ganga river be cleaned but government has not done anything," said Hazare.

Promoted
Listen to the latest songs, only on JioSaavn.com
"How can our government become so insensitive and allow such a senior scientists to die. This is his third fast in last four years. Central government has gone back on all promises made to him during last fast," he said.