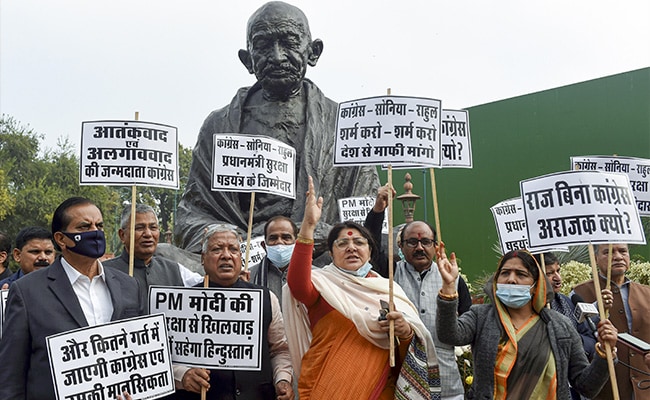 A BJP MP said PM Modi's security was compromised and his life was put in danger. (File)

Several BJP MPs on Friday held protests near Mahatma Gandhi's statue in the Parliament complex against the security breach during Prime Minister Narendra Modi's visit to Punjab. The MPs alleged the Punjab government and senior Congress leaders "conspired to kill the PM."

Speaking to news agency ANI, Rajendra Agrawal, Meerut MP, said, "The security of PM Modi was compromised and his life was put in danger. There was a conspiracy by the Punjab government. The senior leaders of the Congress party have not rendered an apology for the incident. It is a matter of great concern."

Rajasthan MP PP Chaudhary said: "The incident was a pre-planned one. The government that could not provide security to the PM then how can it ensure of its citizen. The Congress party are unable to come to terms with the popularity of the PM."

Mr Chaudhary demanded the dismissal of the Punjab government and imposing the President's rule in the state.

Rajya Sabha MP Bhubaneswar Kalita said: "The conspiracy to attack the PM cavalcade was hatched at Congress party and Punjab Chief Minister's offices. So, inquiry should be initiated against responsible officials and the Punjab Chief Minister should resign from the post."

Prime Minister Narendra Modi's visit to Punjab's Ferozepur on Wednesday was called off citing major security lapse. The PM was stuck on a flyover for 15-20 minutes due to the road being blocked by some protesters, the Ministry of Home Affairs (MHA) said in a statement.

The MHA has taken cognisance of this serious security lapse and sought a detailed report from the state government.