The Indian national flag has been shown in middle portion of the tableau. 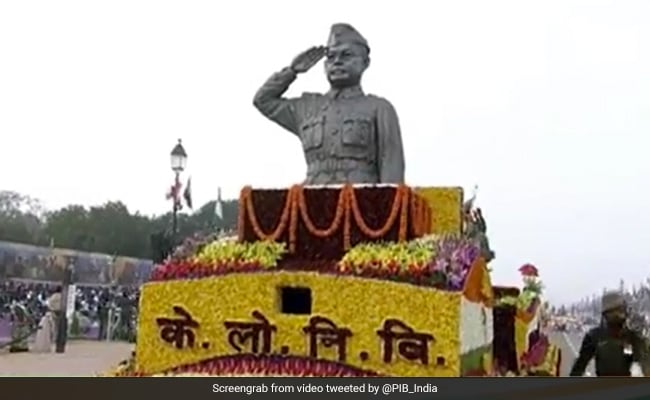 In a floral tribute to Subhas Chandra Bose on his 125th birth anniversary, the CPWD's tableau depicted Netaji and warriors of the Indian National Army during the Republic Day parade on Wednesday.

The float, bedecked with flowers, bore the slogan 'Azadi ka Amrit Mahotsav' on its sides.

The front portion of the tableau depicted a bust of Subhas Chandra Bose in a saluting pose, while heroes of INA were portrayed on a kiosk through old photographs.

The Indian national flag has been shown in middle portion of the tableau. As it rolled down Rajpath, an audio clip of Netaji exhorting people to fight for the country's independence, was played, while many members of the troupe wore matching INA uniform as a tribute to the Azad Hind Fauj.

Strains of 'Kadam Kadam Badhaiye Ja' song was also played during the display on the ceremonial boulevard.

Historical events of Moirang war, where a tricolour was being hoisted by the INA for the first time on Indian soil on the morning of April 14, 1944, was shown in rear portion of the tableau.

The Central Public Works Department (CPWD) is known to depicts India's monuments and rich cultural heritage through floral tableau, and this one also delighted the spectators at the 73rd Republic Day parade.

"India's distinguished revolutionary, Netaji gave his sweat and bold to free India and his words 'It is blood alone that can pay the price of freedom. Give me blood and I will give you freedom' and 'Freedom is not given, it is taken', have always inspired millions," the government said, describing the tableau.

The entire tableau has been crafted in flowers in their natural, vibrant colour to establish an eye-pleasing experience, it said.

The tribute to Netaji on Rajpath comes days after Prime Minister Narendra Modi unveiled a hologram logo of Bose under the canopy in the India Gate complex on his 125th birth anniversary on January 23 this year.

Prior to that PM Modi had announced that a grand statue of Netaji will be installed in the canopy, as a symbol of India's indebtedness to him.

The canopy, originally housed a marble statue of British monarch King George V from 1939-1968, and was built as a memorial after his death in 1936.

The famed canopy, stands on four columns of the Delhi Order devised by Lutyens for the new capital's main buildings sitting on the Raisina Hill complex, radially opposite the India Gate on an long and wide axis called Rajpath (earlier Kingsway).