Indian Navy: The MH-60 Romeo will replace the venerable British-built Sea King, which has been in service for decades 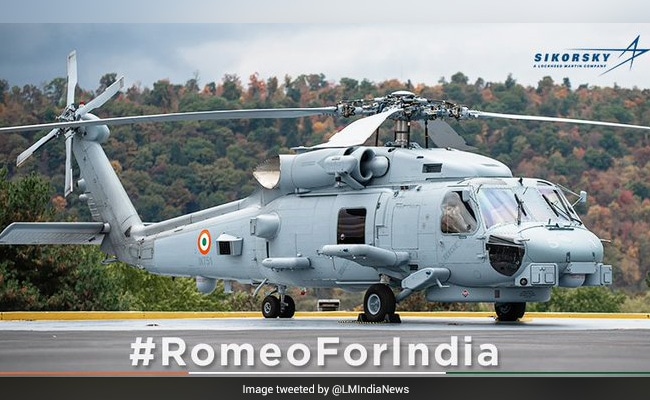 American defence firm Lockheed Martin has greeted India's maritime forces on Navy Day with the first photo of the multirole MH-60 Romeo helicopter, which India is acquiring. The photo features an India-bound MH-60R with a freshly-painted Navy roundel near its tail boom.

The MH-60 Romeo is widely considered among the most advanced anti-submarine helicopters in the world and will be deployed on the navy's warships, replacing the venerable British-built Sea King which has been in service for decades.

"This #NavyDay, we are proud to share the first look of the #IndianNavy's #MH60R in all its glory. #RomeoForIndia" Lockheed Martin tweeted. Navy Day is celebrated every year on December 4 to commemorate the attack on Karachi harbour during the India-Pakistan war in 1971.

The process to buy 24 helicopters for the Indian Navy is going on. A government to government deal was signed for $905 million.

These helicopters are also designed to fire the Naval Strike Missile (NSM) developed by the Norwegian company Kongsberg Defence & Aerospace. The NSM can engage warships at a range of 185 km. The original package India was looking at included the provision of NSM training missiles, a precursor to a potential deal for the missile system.

For several years, the Indian Navy has been operating advanced warships including the made-in-India Kolkata Class destroyers without any modern anti-submarine helicopters on board, the lack of which has been considered a glaring operational deficiency at a time when China has markedly stepped up its presence in the Indian Ocean Region by operating a full-scale base in Djibouti in the Horn of Africa.

The first MH-60R helicopters from the US will arrive next year.