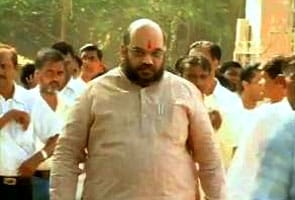 The warrant was issued by the chief additional judicial magistrate A I Raval on Monday after CBI probing the case, applied for their remand.

According to the chargesheet filed by CBI, after the probe in the case was transferred to the agency in January this year, Shah directed Patel and Chudasama to "convince, coerce, threaten, and influence the witnesses on his behalf to conceal the truth from CBI, about the fake encounter of Sohrabuddin."

Investigation revealed that Patel conveyed a message to two witnesses Raman Patel and Dashrat Patel that what they would be deposing before CBI would be supplied to them in the form of written statements by DCP Abhay Chudasama, who is also an accused in the case.

Both the witnesses had four meetings with middlemen sent by Shah at four different places.

These meetings were videographed by the two witnesses in a discreet manner. These audio-visual recording has been seized by the CBI.

"The transcription of these meetings revealed obstruction and influencing the witnesses of this case by Amit Shah and Abhay Chudasama," the chargesheet said .

Shah, the former Shah is now in CBI custody and lodged in Sabarmati jail.

"The audio-visual records also indicate that Ajay Patel and Yashpal Chudasama had actively participated in the main conspiracy and the crime committed in furtherance to the conspiracy," it added.

Raman Patel and Dashrat Patel are owners of Popular Builders where Gujarat police had stage managed a shoot out using close aides of Sohrabuddin with the purpose of lodging FIR against the alleged gangster in Gujarat in December 2004, it further said.

The chargesheet said the complaint was filed against Sohrabuddin at the behest of Shah who was under pressure from the marble lobby in neighbouring Rajasthan state.

Promoted
Listen to the latest songs, only on JioSaavn.com
These merchants were allegedly being harassed by Sohrabuddin, who made frequent demands for hefty protection money.