Omar Abdullah said the people of the state were now privy to such tactics and "political tears which are only seen in their (his rival parties) eyes at the time of elections". 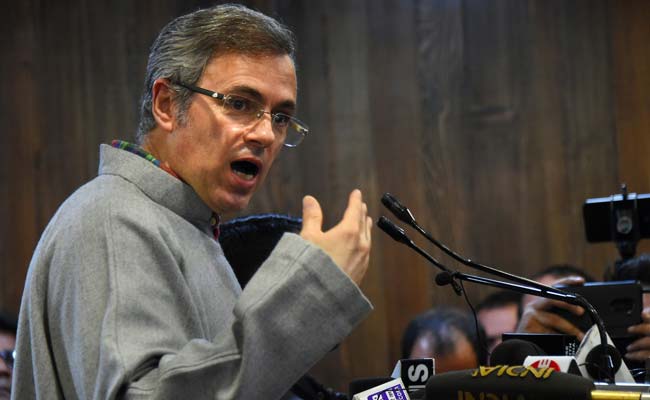 National Conference vice-president Omar Abdullah Monday said the ban on Jamaat-e-Islami (JeI) was a "thought-out match fixing" between the BJP and the PDP as part of election "gimmickry" to help each other.

Addressing a gathering at Damhal Hanjipora in Kulgam district of south Kashmir, he said the people of the state were now privy to such tactics and "political tears which are only seen in their (his rival parties) eyes at the time of elections".

Attacking PDP chief Mehbooba Mufti, he said "nowadays she is saying that she too might be arrested. What will she be arrested for? This assertion hints towards some tacit match fixing between BJP and PDP. We in Kashmir have been hearing a lot about match fixing," he said.

"I feel the ban on Jamaat-e-Islami (JeI) is a thought-out match fixing between the BJP and PDP to help the BJP save its face in rest of the country and also help the PDP milk the situation here in Kashmir," Mr Abdullah said.

Referring to the alliance between the BJP and PDP, the NC leader said the embrace of former chief minister Late Mufti Mohammad Sayeed with Prime Minister Narendra Modi, when the former took oath in 2015, proved detrimental to the interests of state.

"The state would not have plunged into chaos had the PDP not hobnobbed with the BJP. She (Mehbooba) didn't care about the repercussions of joining hands with the BJP. The only thing she had in mind was saving her party from disintegration.

"Had she not joined hands with the BJP-RSS, Kashmir and its people wouldn't have been subject to what we are going through right now. Today, the RSS takes out procession in the broad daylight flaunting weapons. Who is responsible for it? Who helped them make inroads into the state?" he said.

He said when the BJP withdrew support from the coalition, Mehbooba Mufti didn't ask the governor to dissolve assembly.

"Had she asked governor for dissolution of the assembly, the governor was bound to respect the constitutional obligation. But she didn't (do so) with a sole purpose of keeping her flock together. Had the assembly been dissolved, the governor would have been duty-bound to conduct the elections within six months and the state would have got a representative government," he said.

The former Jammu and Kashmir chief minister said it serves the forces inimical to the interests and identity of state if the National Conference remains out of power.

"Even today forces inimical to state's unique status are trying their level best to weaken states identity and integrity. Time bears testimony to the fact that whenever the NC was not in power, the state's special status was ruthlessly fiddled with," Mr Abdullah said.