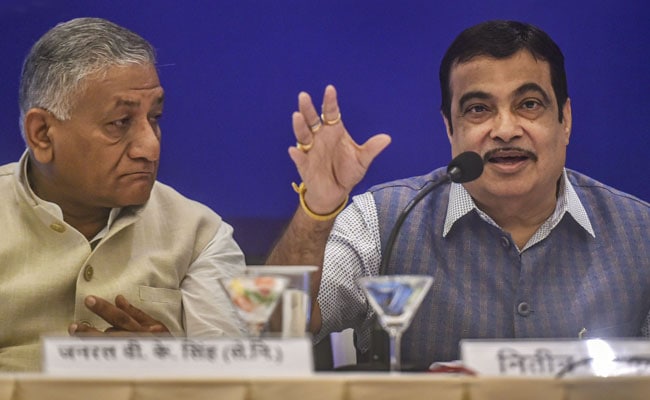 The minister claimed the "PM and PMO" have full faith in NHAI.

Union minister Nitin Gadkari on Monday said a roads department official has been suspended for posting a communication from the Prime Minister's Office (PMO) on highway projects on social media.

Posting of this communication led to "fake and misleading" news items about the PMO raising concerns over financial troubles of the National Highways Authority of India (NHAI), the minister told reporters in Mumbai.

The NHAI has been massively expanding its projects and the pace of execution in the last few years. Newer models of financing are being deployed by the ministry in executing the projects, development of which is aiding the economy.

Mr Gadkari said some person wrote a 1,300-page letter having suggestions on road projects. On the instructions of Prime Minister Narendra Modi, his Principal Secretary Nripendra Mishra forwarded it to nine secretaries to look into the matter, including the roads department secretary.

"One of our officials uploaded a picture of that (letter) on social media and lot of fake news items got published because of that. We have suspended the official," Mr Gadkari said, replying to a specific question on the financial health of NHAI and its ability to execute projects.

The minister claimed the "PM and PMO" have full faith in NHAI and have asked it to increase the number of projects.

A similar nudge is coming from the Finance Ministry which is looking at the trickle-down impact of the road projects to push the sagging economic growth, he said.

Mr Gadkari asserted that there is no dearth of money with the authority and also affirmed that it will be announcing projects worth Rs 5 lakh crore by the end of the year.

Mr Gadkari said he will soon be making a list of 450 projects of NHAI and tabulating the costs of land acquisition, construction and whether it has the necessary regulatory approvals, and move ahead only when all the points have green ticks.

Replying to a question on how he plans to raise the resources, he said no extra fiscal support will be sought.

Led by Mr Gadkari and his junior minister Gen VK Singh, NHAI officials on Monday met investors as part of a roadshow to attract investments into the road projects under the toll-operate-transfer basis.

The meeting, which came after a similar move in August last year, had the participation of top bankers, including State Bank of India chairman Rajnish Kumar and Bank of Baroda's managing director and chief executive PS Jayakumar.

Mr Gadkari later told reporters that it was a fruitful meeting with the investors and added that banks are willing to support the roads sector.

The NHAI has so far had a mixed response for the bids for road projects, with the first issue under the TOT basis getting a massive response, which was followed by a subdued second issue.

At the meeting, a senior NHAI official said the authority is targeting to build 4,500 km of roads in FY20 as against 3,900 km in the year-ago period.

It will also be looking at a second tranche of the ''masala bonds'' sometime soon, he said, without specifying the quantum or the timeline for the issue.