Number Of Deaths In Assam Floods Rises To 64, Water Recedes In Some Areas

Flood water, however, receded in five districts and the displaced people returned to their kuchcha houses to find most of their dwellings swept away by torrential rains. 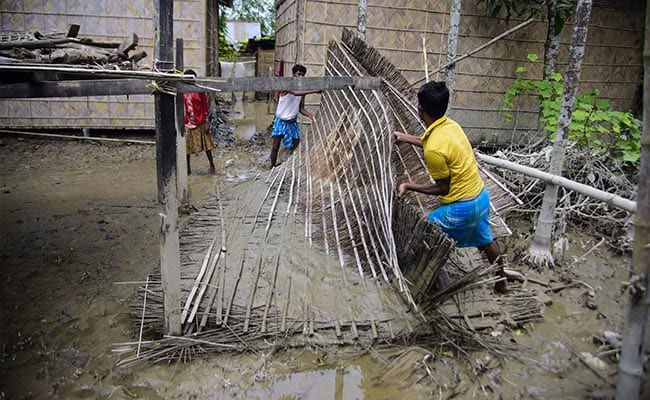 With the death of five more people, the number of deaths in Assam floods rose to 64 on Sunday, even as water showed receding trends in some areas of the state.

Of the five fresh deaths, two were reported from Morigaon district and one each from Dhemaji, Goalpara and Kamrup districts, according to the Assam State Disaster Management Authority (ASDMA).

Flood water, however, receded in five districts and the displaced people returned to their kuchcha houses to find most of their dwellings swept away by torrential rains.

The flood water continued to submerge 2,669 villages, 1.35 lakh hectare of crop lands and a portion of Kaziranga National Park in Golaghat district, the ASDMA bulletin said.

The number of deaths of animals at the Kaziranga National Park is 141, he said.

Meanwhile, the Brahmaputra river is flowing above the danger level at Neamatighat in Jorhat district and Dhubri district, Jia Bharali at N T Road Crossing in Sonitpur district and Kopili at Dharamtul in Nagaon district, the bulletin said.

Over 1,15,389 displaced people are still in 829 relief camps and relief distribution centres set up by the district administrations.

Meanwhile, the Army provided medical and veterinary aid to the stranded people in the state, with a unit of its Red Horns Division along with others agencies organising a veterinary and medical camp at a village in Nalbari district, defence sources said.

The 9th Battalion of the JAT Regiment also conducted a free health camp in Barpeta, where over 3,000 people and nearly 800 livestock were treated.