Around 3.78 lakh people were so far evacuated from the worst-hit Kolhapur and Sangli districts where water began to recede slowly on Saturday, another official said. 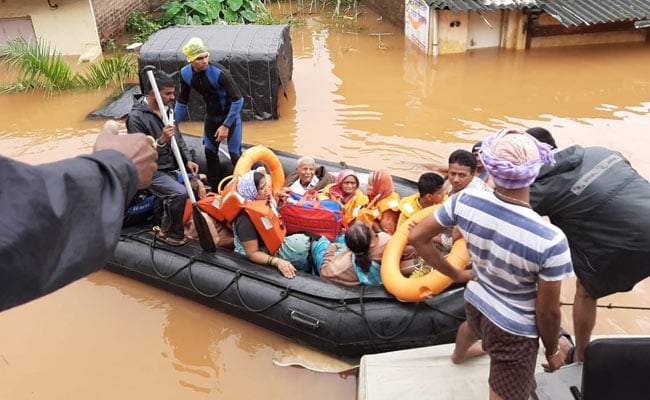 Over 30 people have been killed in rain-related incidents in five districts of western Maharashtra.

With the recovery of five more bodies, the number of dead in the boat capsize tragedy in Sangli district has gone up to 17, even as over four lakh people have so far been been evacuated from flood-affected parts of Maharashtra, officials said on Sunday.

More than five lakh cusec of water is being discharged from Almatti dam on the Krishna river in Karnataka to ease the flood situation in western Maharashtra.

Over 30 people have been killed in rain-related incidents in five districts of western Maharashtra in the last one week, including 17 who drowned when a boat capsized near Brahmanal village in Sangli on Thursday.

"So far, 17 bodies have been recovered following the boat tragedy. Water has started receding in some areas of Sangli," a district administration official said.

On Thursday, nine people drowned and as many others went missing when the boat capsized during a rescue operation. Three more bodies were recovered by Saturday and five more were found till Sunday, taking the toll in the incident to 17, he said.

Around 3.78 lakh people were so far evacuated from the worst-hit Kolhapur and Sangli districts where water began to recede slowly on Saturday, another official said.

In some areas of Kolhapur, food packets were being dropped by helicopters as the connecting roads there were still water-logged, he said.

Nearly 369 temporary shelters have been set up for those displaced by floods in these districts, he said.

A team of 100 private doctors from Thane will soon be going to Sangli and Kolhapur to provide medical assistance.

Apart from medicines, they will also be carrying clothes and blankets for the flood-hit people, he said.