Ajit Doval In Russia: The parties discussed the development of trade and economic ties and current issues related to cooperation in other spheres of mutual interest, including the peaceful use of outer space. 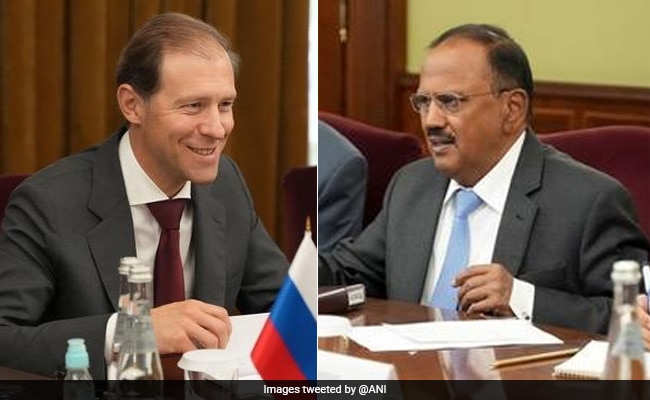 Russian Deputy Prime Minister Denis Manturov met with National Security Advisor Ajit Doval and held a discussion on trade and economic ties between the countries including the peaceful use of outer space.

Mr Manturov, who is also Minister of Industry and Trade, participated in a meeting in his capacity as Chair of the Russian side of the Intergovernmental Russian-Indian Commission for Trade, Economic, Scientific, Technological, and Cultural Cooperation, the Russian Embassy said in a statement.

The parties discussed the development of trade and economic ties and current issues related to cooperation in other spheres of mutual interest, including the peaceful use of outer space.

"I think it is important to use the mechanism of the Intergovernmental Commission to the maximum degree in order to strengthen bilateral collaboration across the board," Mr Manturov stressed.

He also congratulated the Indian partners on the 75th anniversary of India's independence.

Earlier, Mr Doval met his Russian counterpart Nikolai Patrushev in Moscow on Wednesday and held discussions on a wide range of bilateral and international issues. The Russian embassy, in a statement, said the talks included cooperation in the area of security, as well as topical problems in the region.

"On August 17 in Moscow, Secretary of the Security Council of the Russian Federation Nikolai Patrushev held talks with National Security Advisor to the Prime Minister of India Ajit Doval," the Russian Embassy in India tweeted.

"A wide range of issues of bilateral cooperation in the area of security, as well as topical problems on the regional and international agenda, were discussed," the embassy said.

This visit comes as India continues to engage with Russia on a number of issues including India's energy security amid the Ukraine conflict.

A US media report recently said Russia surpassed Saudi Arabia in June to become the second-biggest supplier of crude to India. New Delhi has maintained that its oil import from Moscow will be guided by its energy security needs.

On Tuesday, External Affairs Minister S Jaishankar defended India's crude oil imports from Russia and termed it the "best deal" for the country.

Addressing the Indian community in Bangkok, Mr Jaishankar discussed the surge in energy prices across the world due to the Russia-Ukraine war and said, "We have been very open and honest about our interests. I have a country with a per capita income of USD 2,000, these are not people who can afford higher energy prices. It's my moral duty to ensure the best deal."

Explaining how oil and gas prices are unreasonably high throughout the world, the External Affairs Minister said Europe was buying more oil from the Middle East countries which were Asia's traditional suppliers, however, now it was diverted to Europe.