NRI in Sweden claims son being held in foster care 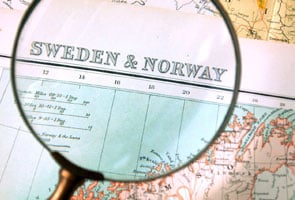 Kolkata: Close on the heels of the Norway child custody row, a similar case has come to light in Sweden where an NRI woman has claimed that her son is being held in foster care on charges of neglect and sought the help from Indian authorities.

Inspired by the recent release of Abhigyan and Aishwarya by a Norwegian civil court and their return to India with their uncle and sole custodian, the NRI mother, Annie Johansson - whose earlier name was Nirmalkumar Bharos - has approached Abhigyan and Aishwarya's parents, Anurup and Sagarika Bhattacharya, to help her get custody of her 11-year-old son Domenic held in Sweden's foster care.

Ms Johansson's son is being held by the Swedish Gotland Municipal Social Welfare Committee, Kolkata-based NGO India's Smile, which has claimed to have brought to light the custody row over the two NRI children in Norway, told PTI.

She has contacted the NGO from Visby in Sweden, India's Smile secretary Trustee Rajeev Sarkar said.

The NGO said that the authorities of Gotland Municipal Social Welfare Committee had allegedly taken away Domenic in 2009 and placed him in an emergency foster home on the ground that the parents were not taking proper care of him. The mother alleged that the Swedish authorities had no idea of Indian culture and tradition.

Ms Johansson, the NGO said, has sought the help of the Indian people and government to get her son back, and has expressed her wish to return to India permanently from Sweden once Domenic's custody is restored to her.

Annie Johansson, a resident of Pune, married Christer Johansson in India on April 24, 2000. After their marriage, the couple continued to stay in India.

But the Johanssons lost everything in the 2001 Gujarat earthquake. Pregnant with Domenic then, the Johanssons decided to migrate back to Sweden. Domenic was born on Swedish soil on September 9, 2001.

Another plea of hers to the Indian External Affairs ministry, was under consideration, the NGO claimed.