Delhi and other areas in the North Indian plains have been recording temperatures lower than that in hill stations such as Shimla and Mussoorie. 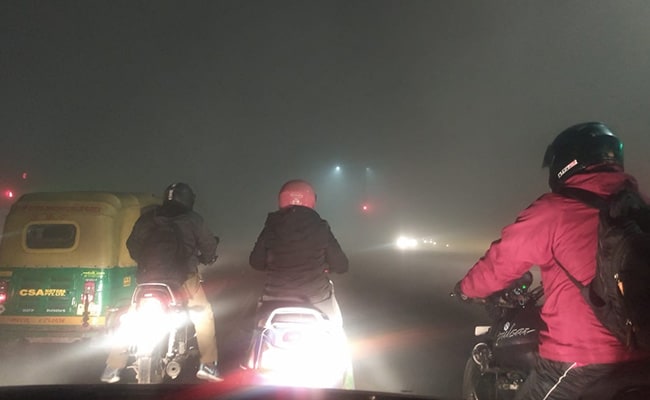 On Sunday, Delhi recorded a minimum of 3.2 degrees Celsius

Dense fog across the Indo-Gangetic belt, which hinders sun rays from reaching the ground, and the continuous flow of icy northerly winds aggravated cold conditions across the plains of north India that in some places recorded temperatures lower than hill stations, meteorologists said today.

But the density increased this time as the flow of warm easterly winds began at a time the northerly cold winds already existed, he said, adding this also contributed to the decline in temperatures.

Delhi and other areas in the North Indian plains have been recording temperatures lower than that in hill stations such as Shimla and Mussoorie.

In Haryana, minimum temperatures hovered close to the freezing point at some places on Sunday. On the same day, Rajasthan capital Jaipur''s minimum temperature settled at 1.4 degrees Celsius -- the lowest in more than five decades.

Mahesh Palawat, Vice President (Meteorology and Climate Change) of Skymet Weather, said the continuous flow of icy cold winds from the western Himalayas have not stopped in the past 10 days.

"This is an unusual phenomenon. Usually there is a western disturbance which helps break the cold wave spell but this did not happen in last 10 days," Palawat said.

Western disturbance is a cyclonic circulation that originates in the Mediterranean Sea and brings rains over northwest India.

Palwat also said that in the hills, the sun rays are able to penetrate the fog and helps clear the sky. With the sun rays reaching the ground, the temperature rises despite the chill.

LS Rathore, former director general of the IMD, said fog factors differ in the hills and the plains.

"The rays hit the hills first and there is more scope for the fog to dissipate. So, the temperature in the hills settles down after sunrise. On the contrary, in the plains, it becomes difficult for the rays to penetrate through fog. This is why the Indo-Gangetic belt is cold throughout the day," Mr Rathore added.