No Room for LK Advani in Parliament House 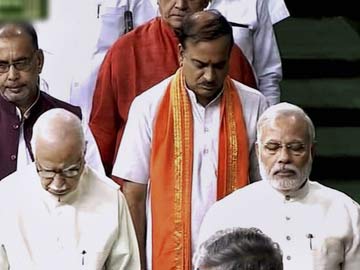 New Delhi: When former deputy prime minister LK Advani reached his office in Parliament during the lunch-break today, he was confronted with a humiliating situation. The plaque with his name at the door of the room allotted to him in the 15th Lok Sabha - which said that he is acting chairman of the National Democratic Alliance or the NDA - had been removed.

The 86-year-old leader was forced to sit in the BJP's parliamentary party office during the recess, in a room earmarked for the party's deputy leader.

Gopinath Munde, who was killed in an accident on Tuesday, held the post of deputy leader in the previous Lok Sabha, while his counterpart in the Rajya Sabha was Ravi Shankar Prasad, who is now a Cabinet Minister in the Narendra Modi government.

The room that Mr Advani sat in for the last five years is the NDA chairman's room. Former prime minister Atal Bihari Vajpayee, who has been ill and out of politics for many years now, continues to remain NDA chairman. Mr Advani was designated acting chairman of the alliance in 2004, after the alliance conceded power to the UPA.

Mr Advani's name-plate, said sources, was removed yesterday, a move which is being viewed as a sure-fire signal that he will no longer hold the post of acting chairman of the NDA.

The BJP leader had to shift to the room earmarked for Mr Vajpayee in 2009 after his party elevated Sushma Swaraj to the post of Leader of the Opposition in the Lok Sabha. Mr Advani had also held that post since 2004.

Promoted
Listen to the latest songs, only on JioSaavn.com
Mr Advani was the BJP's prime ministerial candidate in 2009. Last year, when the party decided to project Narendra Modi for PM, Mr Advani had staged public sulks in protest. In March, he told his party colleagues that he wanted to contest the Lok Sabha polls from Bhopal, and not Gandhinagar, a seat held by him five times in the past. He feared that the BJP's Gujarat unit would punish him for opposing Mr Modi's elevation as the party's prime ministerial face. He was eventually persuaded to contest from Gandhinagar.

Mr Advani won the seat by a whopping margin of 4.83 lakh votes.