"No One Is Safe": Arvind Kejriwal On Alleged Attack On AAP Leaders In Gujarat 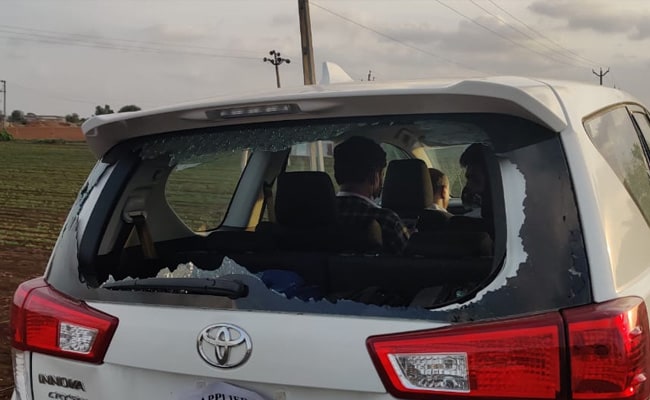 The Aam Aadmi Party has alleged that some of their leaders were attacked in Gujarat's Junagarh during a foot march, in which 10 people were injured. The party has claimed that the BJP is behind the attack, saying they are psyched over AAP's performance in the local body polls. The BJP has denied the allegations. Assembly elections are due in Gujarat next year. Along with Punjab, Uttar Pradesh and Gujarat is high on AAP's list of expansion.

Urged him to file FIR, arrest the culprits, ensure strong action against culprits and ensure protection of AAP leaders and workers. https://t.co/BoZ8QDdthu

AAP said a convoy of vehicles carrying AAP leaders Isudan Gadhvi, Pravin Ram, Mahesh Sawani and others was attacked on Wednesday evening in Junagadh, where they had organised a "Jan Samvedna Yatra".

Among others, its Gujarat unit chief Gopal Italia was also attacked, the party said.

"None of our party workers are involved in this. A group of people from an organisation were protesting against the AAP with placards on the road. When the convoy reached them, some AAP members in the cars abused them, after which they got agitated and a clash followed. Our party has nothing to do with this," PTI quoted the BJP''s district president Kirit Patel as saying.

In a Hindi tweet, Mr Kejriwal said, "If people like Ishudan and Mahesh Bhai are being attacked openly in Gujarat then no one is safe in Gujarat. This violence is your anger, your defeat. Win the hearts of people by giving them good facilities, don't scare them by attacking the opposition. These people are not afraid".

Popular Gujarati journalist Isudan Gadhvi and Mahesh Savani had recently joined the party. They, along with others, were campaigning in the Visavadat area of Gujarat, reported news agency ANI.

Earlier this month, Mr Kejriwal had declared that AAP will contest all 182 assembly seats of Gujarat next year. At the party conclave where he made the announcement, Mr Gadhvi had joined the party.

The BJP -- which continued its dominance over the local bodies in the election – had said AAP is more of a competition for the Congress. Mr Kejriwal had hit back, citing the party's track record in Delhi.

Addressing AAP corporators in Surat, where the party has done well, Mr Kejriwal said:  "In our first attempt, AAP won 28 Assembly seats in Delhi and came to power. People trusted us because they knew that we are true patriots, as we were associated with Anna Hazare's agitation… The people of Gujarat are watching you with great hope."

"In the 49 days of our rule, we did a lot of 'pro-people' work. As a result, the people of Delhi gave us 67 seats in the second election. Now, six crore people of Gujarat will observe the work of 27 AAP corporators. If you perform well, I am sure there will be a huge revolution in 2022," the Delhi Chief Minister had added.

AAP had made its debut in Gujarat in the 2017 assembly polls, but the party had been unable to win a single seat. All its 29 candidates had lost their deposits as he party's best-known faces -- Mr Kejriwal and Manish Sisodia -- failed to turn up for campaigning. This time, Mr Kejriwal made an early appearance, holding a roadshow in Surat soon after the elections.