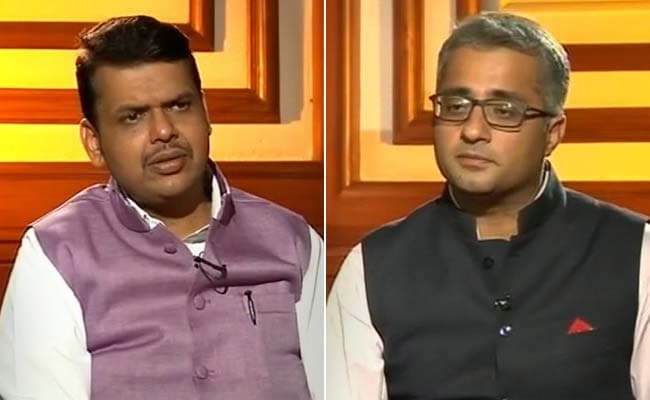 Maharashtra Chief Minister Devendra Fadnavis during an interview to NDTV

Soon, investigating agencies will no longer need the mandatory go-ahead from the government to probe and prosecute an elected representative in a corruption case, said Mr Fadnavis.

"There is no need of sanction to prosecute them. Why should sanction be required for probe against politicians," he said.

The Chief Minister says he will bring in a new law to ensure no sanction was needed for such an investigation if "there was prima facie evidence" against the allegedly corrupt leader.

Mr Fadnavis also announced his plans to probe some of the multi-crore scams that had plagued the earlier government - a coalition of the Nationalist Congress Party or NCP and the Congress had ruled the state for 15 years before being ousted by the BJP in the Assembly elections held in October.

"The government will probe the irrigation scam and the Adarsh scam on merit," said Mr Fadnavis, claiming there was "no political vendetta" behind his government's decision to probe these scams.

Incidentally, in September, the state home department had given Maharashtra Anti-Corruption Bureau or ACB the permission to initiate an 'open inquiry' against then-deputy chief minister Ajit Pawar and former minister Sunil Tatkare, both senior leaders of the NCP, in connection to an alleged multi-crore irrigation scam.

In the Adarsh Housing Society case, the apartments intended for war veterans and widows in a highrise building in Mumbai's posh Colaba were allegedly grabbed by politicians, defence officers and bureaucrats.

Congress Member of Parliament Ashok Chavan, who had to resign from the state Chief Minister's post in 2010 over the scam, is among the 13 men named in the first charge-sheet filed by the Central Bureau of Investigation.

Vowing that his government will have "zero tolerance on corruption", Mr Fadnavis also seemed to take a dig at his predecessor, former Congress Chief Minister Prithviraj Chavan.

"I will act against the corrupt; I am not Prithviraj Chavan, I am Devendra Fadnavis," he said.