"No Mention Of Ganga Bodies, But Claims Covid Down": Congress Shreds Yogi Adityanath

COVID-19 Uttar Pradesh: "It is shocking that Ypgi Adityanath made no mention of the bodies that have found floating in the Ganga over the past few days. Instead of explaining this, the Chief Minister claimed that Covid is on the decline," the Congress alleged, 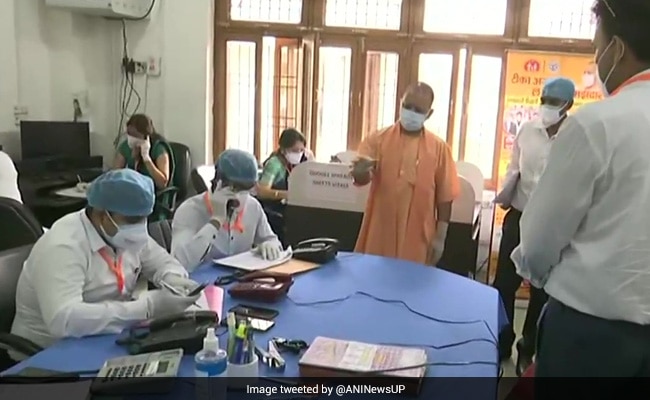 Uttar Pradesh Chief Minister Yogi Adityanath visited the Aligarh Muslim University today to take stock of the COVID-19 situation at the university, where at least 35 serving and retired faculty members have died due to COVID-19 or Covid-like symptoms in the recent weeks.

Expressing grief over the deaths at Aligarh Muslim University's Jawaharlal Nehru Medical College, he said he hoped that the vaccination drive on the campus would pick up soon and help in improving the situation.

On his first visit to AMU since he assumed office in 2017, the Chief Minister also said that the supply of oxygen to the university's medical college is being augmented.

The university hospital, however, hasn't reported any deaths due to the shortage of oxygen.

Meanwhile, the Congress termed Yogi Adityanath's visit "an attempt to cover up the total breakdown of health services in UP".

AMU's several senior faculty members, retired professors and non-teaching staff have succumbed to COVID-19 or Covid-like symptoms over the past three weeks.

Alarmed by the deaths, AMU Vice Chancellor Tariq Mansoor had written to the Indian Council of Medical Research on May 9, urging it to study if a particular COVID-19 variant is circulating around the university campus.

The university's medical college had also sent some samples for genome sequencing to the Institute of Genomics and Integrated Biology Laboratory, Delhi.

Ypgi Adityanath reached Aligarh shortly before noon in a helicopter that landed at the AMU Cricket Ground.

He held a meeting with senior officials of AMU and the district administration at the medical college's auditorium.

Speaking to reporters after the meeting, the chief minister said he hoped that the situation in the university would improve once the vaccination drive on the campus picks up.

He said the supply of oxygen to the Jawaharlal Nehru Medical College is being increased.

The supply began on Wednesday and this will resolve any shortage of oxygen.

Officials at the Jawaharlal Nehru Medical College have been seeking urgent supplies of oxygen cylinders for the past two weeks.

According to hospital authorities, the medical college hadn't received a single oxygen cylinder in a fortnight till Wednesday and was solely dependent on its three liquid oxygen plants.

Though the hospital authorities have not reported any deaths due to oxygen scarcity, there have been unofficial reports pointing to acute patient distress caused by the non-availability of oxygen cylinders and "low-pressure levels" in pipe supply.

Yogi Adityanath also held a meeting to review the COVID-19 situation in Aligarh with district officials at the integrated Covid control centre.

He said there has been a "decline in active COVID-19 cases" in the Aligarh division "in the past week as compared to the previous week".

Yogi Adityanath also claimed that there has been a marked decline in the number of active cases across the state over the past few days and added that steps are being taken to augment oxygen supplies.

He said the shortfall of oxygen was the result of a sudden rise in the daily demand for the life-saving gas last month from 300 metric tonnes to 1,000 metric tonnes.

Ypgi Adityanath said the state government has also started preparing for a possible third wave of the COVID-19 pandemic.

As of Thursday, Uttar Pradesh's COVID-19 caseload stands at 15,80,980 while 16,646 people have succumbed to the viral disease in the state, according to officials.

Congress spokesperson and former Aligarh MLA Vivek Bansal alleged that Yogi Adityanath's visit to AMU was "an attempt to cover up the total breakdown of health services in UP".

It is "shocking" that Ypgi Adityanath made no mention of the bodies that have found floating in the Ganga river over the past few days during his media briefing. "Instead of explaining this, the Chief Minister claimed that Covid is on the decline," he said.

Mr Bansal alleged that the state's COVID-19 data is not accurate as there is no provision of testing in rural areas where people are succumbing to the viral disease even before they can be tested.

He claimed that though the chief minister has announced that COVID-19 patients undergoing treatment in private hospitals would be reimbursed by the government, it remains largely "on paper" and people are running from pillar to post to get treatment.

Earlier, Mr Bansal and a number of Congress workers tried to hold a protest at the makeshift helipad where Yogi Adityanath's helicopter landed but were prevented from doing so by police.

"Best Way To Celebrate Is...": Shah Rukh Khan On 30 Years In Bollywood