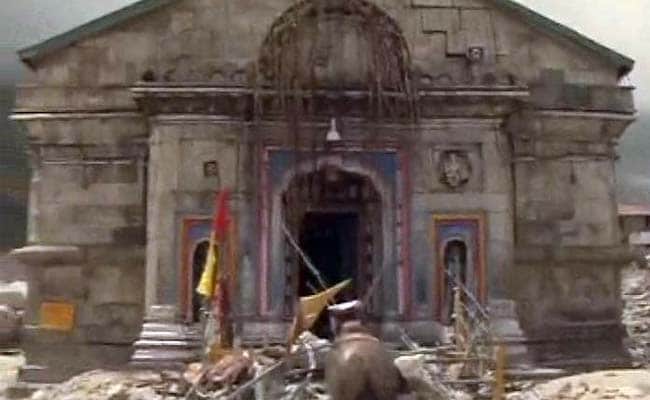 Kedarnath shrine was badly affected by the deadly floods and landslides in June, 2013 in Uttarakhand.

The Himalayan shrine of Kedarnath which was marred by devastating deluge in 2013 is stable and its foundation was not damaged, an expert team of IIT-Madras has found.

The experts, who were asked by the Archaeological Survey of India (ASI) to examine the condition of the foundation in wake of the floods have also arrived at the conclusion that there was no danger to the temple, according to an ASI official.

"The IIT Madras experts visited the temple thrice for the purpose. They have submitted their interim report that the temple is stable and there was no major danger," an ASI official told PTI.

Also, the team has observed that the foundation of the temple was not damaged, he added.

The ASI was handed the responsibility of restoring the temple that was badly affected by the deadly floods and landslides in June, 2013 in Uttarakhand in which over 5,700 people are presumed dead by the state government.

The ASI is engaged in major works including packing stones (matching the original profile and design) and providing wooden flooring within the Mandapa inside the temple, as part of the restoration works.

According to officials, non-destructive testing instruments that do not disturb the structure of the temple were used by the IIT-team for assessing the health of the structure, foundation and walls.

Pointing out that a few settlements were noticed in the rocky surface of the structure, an ASI official said, such settlements were formed when the temple was constructed several centuries ago.

"These settlements were not due to the flash floods, but were formed when the temple structure was raised. These settlements usually take place during early period of construction," the official said.

According to the official website of Sri Badarinath-Sri Kedarnath Temple Committee, the present temple was built in the 8th century AD.

Promoted
Listen to the latest songs, only on JioSaavn.com
Kedarnath is the highest among the 12 Jyotirlingas.

The ASI official further said that they were expecting the final report from IIT-Madras experts shortly.