The gesture was captured on video and later shared on Twitter by Ganesh Joshi, the BJP MLA for Mussoorie. 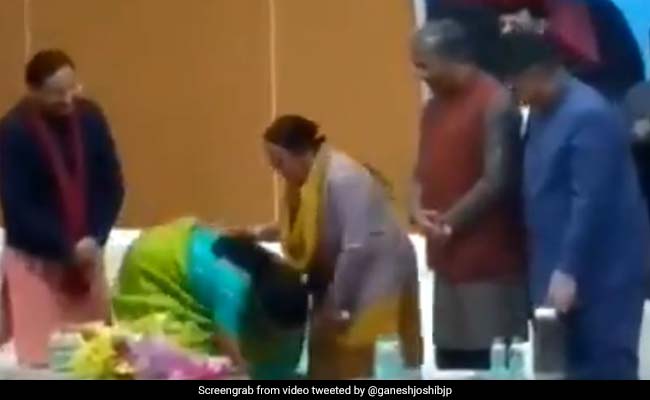 Ms Sitharaman touched the feet of Mr Pradhan's mother when she came on stage at an event.

Defence Minister Nirmala Sitharaman honoured a soldier killed in the line of duty by touching his mother's feet at an army event held in Dehradun today. Hema Kumari had come to the Uttarakhand capital to attend the function held to mark the contributions of her son - Ajit Pradhan - and other soldiers who had in encounters with terrorists.

The gesture was captured on video and later shared on Twitter by Ganesh Joshi, the BJP MLA for Mussoorie.

The Dehradun event came a day after the National Democratic Alliance in Bihar was criticised by the family of killed CRPF soldier Pintu Kumar Singh for failing to send a senior leader to the Patna airport to receive his body. Mr Singh had lost his life during an anti-terror operation in Jammu and Kashmir's Kupwara on Friday.

However, Bihar Chief Minister Nitish Kumar and several members of his cabinet had gone to the airport the same day to welcome Prime Minister Narendra Modi for the Sankalp rally held in the city's Gandhi Maidan.

Janata Dal(United) leader Prashant Kishor apologised on his party's behalf after Mr Kumar and PM Modi came under attack from the opposition on the issue. "We are sorry for the error of judgment on the part of those of us who should have been there with you in this hour of grief," the election strategist-turned-politician said in a tweet.

PM Modi had washed the feet of five sanitation workers during the Kumbh Mela in Uttar Pradesh's Prayagraj last year.  He said it was his way of showing his appreciation for the karmayogis, or saints focussed on work, for all the work they do to better society.

Opposition leaders, however, claimed that the Prime Minister only did it for the optics. "These sanitation workers had been providing services for four years now, but Modi never washed their feet. He is doing it now with the elections in mind," said Andhra Pradesh Chief Minister N Chandrababu Naidu.