India is one of the largest importers of Iran's oil. 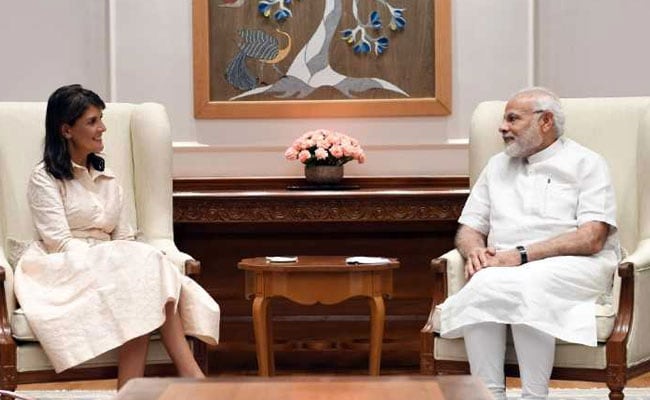 "Know the port has to happen & US is going to work with India to do that," says Ms Haley

US Ambassador to the United Nations Nikki Haley told Prime Minister Narendra Modi on Wednesday it was important India cut Iranian oil use, but said the United States would work to allow India to use an Iranian port as corridor to Afghanistan.

"Sanctions are coming (on Iran) and we're going forward on that, and with India and the US building strong relationships we hoped that they would lessen their dependence on Iran," Nikki Haley, a member of US President Donald Trump's cabinet, told two reporters after her meeting with PM Modi in New Delhi.

The United States said on Tuesday it has told countries to cut all imports of Iranian oil from November and is unlikely to offer any exemptions as the Trump administration ramps up pressure on allies to cut off funding to Iran.

India is one of the largest importers of Iran's oil.

"There's a will, a political will, from both sides to figure out how to make this work," Nikki Haley said. "Prime Minister Modi very much understands where we are with Iran, he didn't question it, he didn't criticize it, he understood it and he also understands that (India's) relationship with the US is strong and important and needs to stay that way."

The US push to curb countries' imports of Iranian oil comes after Donald Trump in May withdrew from a 2015 deal between Iran and six world powers aimed at stalling Tehran's nuclear capabilities in return for the lifting of some sanctions. Donald Trump ordered the reimposition of US sanctions that were suspended under the accord.

Nikki Haley said the implications of Iran-related sanctions would be discussed when the foreign and defense ministers of India and the United States meet shortly. Japan and South Korea, also major buyers of Iranian oil, are in talks with the US government in a bid to avoid the adverse effects of sanctions.

'PORT HAS TO HAPPEN'

Nikki Haley said she also discussed with PM Modi the Indian-backed Chabahar port complex in Iran, being developed as part of a new transportation corridor for landlocked Afghanistan and which could open the way for millions of dollars in trade and cut Afghanistan's dependence on neighboring Pakistan.

"We know the port has to happen and the US is going to work with India to do that," Nikki Haley said. "We know that they're being a great partner with us in Afghanistan and really trying to assist the US and trying to do more. The port's vital in trying to do that."

"We realize we're threading a needle when we do that," said Nikki Haley, describing a balancing act of ensuring Indian use of the port in Iran while Washington is at the same time trying to once again cut Tehran off from international markets.

Nikki Haley has used her role at the UN to regularly attack and ramp up pressure on Iran, accusing it of meddling in Syria and Yemen. She said she spoke with US Secretary of State Mike Pompeo early on Wednesday, before meeting with PM Modi.

Despite rising trade tensions between the United States and India, Nikki Haley - the daughter of Indian immigrants - said "the idea of a trade war wasn't even an option."

Bilateral trade rose to $115 billion in 2016, but the Trump administration wants to narrow its $31 billion deficit with India, and is pressing New Delhi to ease trade barriers.

Nikki Haley said she also discussed military cooperation with PM Modi as the Trump administration has launched an effort to deepen military and economic ties with India as a way to balance China's assertive posture across Asia.