The pits have been dug on the roadside. The recycled material is sourced from multiple vendors across the county. Each toilet costs around Rs 60,000. 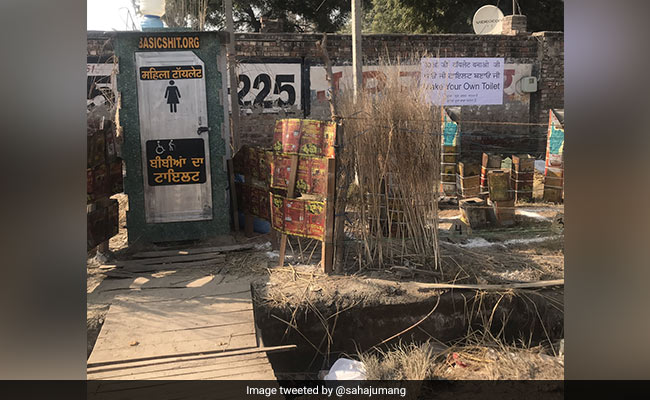 100 women and specially-abled people have been using the bio-toilet every day, NGO founder said

With more women joining the farmers' protest at the Singhu border over the last few days, an NGO is installing bio-toilets made using recycled material to ensure that they don't have to worry about the lack of basic amenities.

Days after farmers from different states set up camp at various border points of Delhi to protest the Centre's new agricultural reforms in late November last year, many women protesters were forced to head back home due to the unavailability of clean toilets and bathing spaces.

"This is the first time we are doing a project at a protest site. Someone sent me a picture of a street here which was completely covered with fecal matter. So, we thought we should come here and do something," said Ashwini Agarwal, the founder of Basicshit, an NGO working for sanitation issues.

Each toilet will have a 10-foot-deep pit. Sawdust and charcoal will be used to remove the odour, he said.

The pits have been dug on the roadside. The recycled material is sourced from multiple vendors across the county. Each toilet costs around Rs 60,000, he said.

The NGO has already installed a bio-toilet at the protest site.

Around 100 women and specially-abled people have been using the bio-toilet every day, Mr Agarwal said.

The NGO has also initiated crowdfunding to help it build more such toilets.

"Anyone can install such a bio-toilet. There are ''do-it-yourself'' designs available on our website. We have also been teaching farmers how to make one," Mr Agarwal said.

More bio-toilets are coming up at the women's shelter near the main stage at Singhu border, he said.

Farmers have come forward to dig the pits and install the toilets, Sahaj Umang Singh from Basicshit said.

"They have also given us empty tin canisters which we have used for making urinals for men," he said.

"The idea to make a urinal for men out of tin canister originated at the protest site. The farmers hand them over to us after using the ghee and oil," he added.

Farmers have been camping at Delhi's gateways for over a month now to demand the repeal of the Centre's three farm laws -- the Farmers (Empowerment and Protection) Agreement of Price Assurance and Farm Services Act, Farmers Produce Trade and Commerce (Promotion and Facilitation) Act, and the Essential Commodities (Amendment) Act.

Enacted in September, the three farm laws have been projected by the central government as major reforms in the agriculture sector that will remove the middleman and allow farmers to sell their produce anywhere in the country.

However, the protesting farmers have expressed apprehension that the new laws would pave the way for eliminating the safety cushion of MSP and do away with the mandi system, leaving them at the mercy of big corporates.